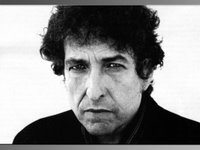 For most writers, stalling is not only an occupational hazard but a fine art. So when I breezed into the Merc on Friday for a long afternoon of translating, the first thing I did was find a way not to work: I picked up Jonathan Lethem's Rolling Stone interview with Bob Dylan. I knew I had made the right decision the moment I came across Dylan's comment about the joys of literary composition. "That's what I like about books," he noted, "there's no noise in it." Even better was his artistic credo, delivered right at the end of the piece, which puts the individual, the utter eccentric, up on the pedestal where he or she belongs:

That was what you heard--the individual crying in the wilderness. So that's kind of lost too. I mean, who's the last individual performer that you can think of--Elton John, maybe? I'm talking about artists with the willpower not to conform to anybody's reality but their own. Patsy Cline and Billy Lee Riley. Plato and Socrates, Whitman and Emerson. Slim Harpo and Donald Trump. It's a lost art form. I don't know who else does it beside myself, to tell you the truth.

Now, one of these things (as the song goes) is not the like the other ones. Still, Bob is dead serious, and correct, about the mulish, contrarian power of the real Prometheans. Yes, it's a tiny club. And yes, Bob appears to be a member in good standing, having just released his third firecracker in a row. Like Love and Theft, the self-produced treasures on Modern Times split the difference between nasty blues and Dylan's oddly endearing croon. Jody Rosen's excellent piece at Slate covered most of the bases, although I would differ with him on two points. First, Modern Times hasn't yet nosed out its predecessor, at least not to my ear--there's nothing on the new disc with quite the damn-the-torpedoes intensity of "Tweedle Dee & Tweedle Dum." But Rosen also illustrates the peril of subtracting the words from the music, at least in his discussion of "Beyond the Horizon." Rosen calls it

one of the most starry-eyed Dylan has ever sung, a gently tumbling soft-shoe that takes a celestial view of romance: "Beyond the horizon/ In springtime or fall/ Love waits forever/ For one and for all." The lines vaguely recall Philip Larkin's famous "what will survive of us is love," and for all the blues-drenched premonitions of doom and rambling bad-ass tales on Modern Times, I suspect that love is the thing that will survive of it.

He's right about the disc's sweet disposition but wrong, surely, about the quality of those lines, which fall well short of Philip Larkin and wouldn't be out of place on a Hallmark greeting card. Dylan can get away with this stuff because of the cryptic, comedic, heartbreaking language that surrounds it, and because his performance fills in the blanks spots and then some. When the poet falters, in other words, the singer picks up the slack. 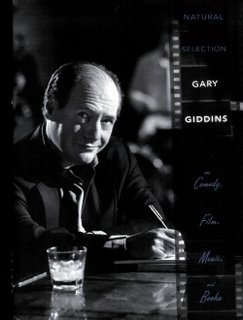 It was ever thus, argues Gary Giddins, in a piece from his splendid new collection Natural Selection. In "Who's Gonna Throw That Minstrel Boy a Coin?", Giddins is quick to acknowledge his subject's verbal wizardry as "a phrasemaker unrivaled since Johnny Mercer, if not Kipling." But what really interests him is Dylan's stature as a singer, whose theatrical, protean attack more than compensated for his technical limitations:

In the '60s, his singing was often found so repellent that his admirers readily apologized for it. Forget the voice, they said, listen to the words--an argument that found its logical outcome as well as box-office support in covers by Peter, Paul and Mary and the Byrds. Yet it was Dylan's unmistakable anti-stylish stylish singing that made him irresistible and unique to those very admirers. His singing was so original that they praised it chiefly for what it wasn't: smooth, which is to say commercial. Approbation, such as it was, centered on his rough-hewn timbre, Woody-like naturalness, road-tested coarseness, conversational ease. Detractors who claimed that he was unintelligible simply were not listening--Dylan's early elocution was crystal. They were too much put off by the snarling, chortling, demonic voice that implied "fuck you" even while insisting, "All I really want to do is, baby, be friends with you."

Exactly. The book, by the way, is heavily tilted toward film criticism, which Giddins has practiced at the New York Sun ever since the Voice was dumb enough to show him the door. Believe it or not, he's as eloquent and encyclopedically informed about movies as he is about jazz and popular music. Give him his Pulitzer, please--it's at least twenty years overdue.

Comments:
I'm a big fan of Bob Dylan's music, but after reading his book, "Bob Dylan--Chronicles," I became disillusioned about the man. (And that book is very poorly edited, by the way.)

Lynne AKA The Wicked Witch of Publishing

Ahh...you took the bait. You fell head first into the trap. You sank to the bottom of Bobby's book wearing cement boots.