Hell hath no fury like a former fan. Doubters need only consult my review of the new Bruce Springsteen CD, which has now been posted at WBUR. Yes, he just headlined the New Orleans Jazz & Heritage Festival, bringing hope to that tempest-tossed community, etc etc. But that's my problem with the guy in a nutshell: I admire everything about him but the music. I began my review this way: 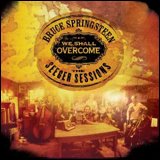 It's hard to pin down exactly when my Bruce Springsteen problem began. As a teenager I worshipped the guy, and still recall a blistering 1977 show at Manhattan's Palladium as one of the high points of my musical education. I stuck with him for a long time after that, savoring the prairie minimalism of Nebraska and his first real tussle with married life, Tunnel of Love. Yet sometime in the late Nineties, he began to bug me. There wasn't any specific moment of disenchantment. In 1997, however, Nicholas Davidoff profiled Springsteen for The New York Times Magazine, and there's a telling passage in there that has lingered in my mind ever since I first read it.

Davidoff is discussing his subject's manner of speech, and describes his accent this way: "There is a Jersey-Pennsylvania lilt to some of his inflections--he says 'hill-larrvus' for 'hilarious'--and, at times, a hint of an Alabama drawl may slip in. (His childhood neighbor was a transplanted Southern truck driver.)" Now, Davidoff is a smart man, about life in general and music in particular (his profile of Johnny Cash in In the Country of Country is one of the best I've ever read.) But in this case he was either too polite or too gullible. When a son of Freehold, New Jersey, starts talking like a drunken Jethro Bodine, it's not because the guy next door was from Alabama. It's called affectation, and much of the time, it's been a toxic additive for Springsteen's art.

Comments:
I lost Spingsteen (or he me) when his art lost its writerly particularity in exchange for stadium-filling hokum...the latter typified by the on-message bludgeon of near-monotone redundancy called 'Born in the U.S.A.' Now, when 'Born to Run' came out, 'Greetings from Asbury Park' was only a couple of years old, and I lived NEAR Asbury Park, in Philly, and Springsteen felt like a local phenomenon...like cocky news from the next neighborhood. The first three albums were sincere and moody masterpieces to a kid who could catch whole sides of each album on the local progressive FM rock station, late at night, with no interruption between the tracks (!). Still can't tell if it was focus-group-driven, post-'80s professionalism that blanded (and cartooned) him to megastardom...or if it was The Boss' own addiction to the quasi-political populism of that Cornbelt pose. In any case, the music just ain't magic anymore, and, to be completely honest, I don't like the people that Springsteen ruined himself pandering to. I'm talkin' to YOU, Tom Joad! Smirk.

Something happened, either to me or to Bruce Springsteen. I used to get positively euphoric listening to some of his songs. Now, the only time I listen to Bruce Springsteen is when I mow the lawn. I strap on my old Walkman and pop in Born in the USA. I'm done when the tape is done.

I kind of feel like I should like more of his music —and some of his work is great. I don't get the new effort at all —again I wish I could like it more.

Plus, I can't watch him perform. Too bad.