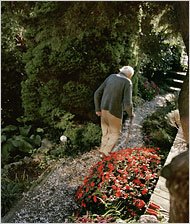 I was saddened to read about the passing of Stanley Kunitz, who died yesterday at the age of 100. There was something comforting, and enormously encouraging, about his long persistence. Yet he was prepared for death as few people are. And according to Christopher Lehmann-Haupt's obituary in the Times, he was quite sensible about his poetic legacy: "Immortality? It's not anything I'd lose sleep over." The joke, of course, is that Kunitz wrote more than a few permanent lines of poetry. Early in his career, he wrestled with Yeatsian grandiloquence and was sometimes pinned to the mat (not exactly a unique fate for poets of his generation). But throughout his middle and late periods, he simplifed his style and produced poems of surpassing delicacy and precision. "The Wellfleet Whale," surely one of the pinnacles of his career, is too long to quote in its entirety. But "Robin Redbreast" blends empathy and grim acceptance as only Kunitz could. And here is "The Long Boat," which echoes Whitman but resists him by making the rocking boat into a literal, leaky vessel:

When his boat snapped loose
from its moorings, under
the screaking of the gulls,
he tried at first to wave
to his dear ones on shore,
but in the rolling fog
they had already lost their faces.
Too tired even to choose
between jumping and calling,
somehow he felt absolved and free
of his burdens, whose mottoes
stamped on his name-tag:
conscience, ambition, and all
that caring.
He was content to lie down
with the family ghosts
in the slop of his cradle,
buffeted by the storm,
endlessly drifting.
Peace! Peace!
To be rocked by the Infinite!
As if it didn't matter
which way was home;
as if he didn't know
he loved the earth so much
he wanted to stay forever.