The other night we rented the final episode of Six Feet Under, and as we watched one character after another shuffle off this mortal coil, I had tears in my eyes the whole time. I could see, even as I wept, little defects in the production: some of the shots of the youngest daughter driving East looked like car commercials, and in their elderly incarnation, almost all the characters seemed to be wearing the identical, white, stringy wig. It was a crude touch, that wig, in a show so attentive to physical detail. Yet it did remind me of an exalted precedent: the scene at the end of Proust where the narrator attends a party and can hardly recognize his aged friends. Being Proust, he doesn't note the phenomenon and move on--he dwells on it for many pages, in those lengthy, oxygen-deprived sentences that are his trademark:

For a few seconds I did not understand why it was that I had difficulty in recognizing the master of the house and the guests and why everyone in the room appeared to have put on a disguise--in most cases a powdered wig--which changed him completely. The Prince himself, as he stood receiving his guests, still had that genial look of a king in a fairy-story which I had remarked in him the first time I had been to his house, but to-day, as though he too felt bound to comply with the rules for fancy dress which he had sent out with the invitations, he had got himself up with a white beard and dragged his feet along the ground as though they were weighted with soles of lead, so that he gave the impression of trying to impersonate one of the "Ages of Man."

For Proust it's not simply a matter of observing how time has transformed his friends. He's also interested in how oblivious we are to our own physical decay--those terrible, tiny increments--and how we tend to live in a state of death-defying innocence. What sets us straight is the shock of seeing other people grow old. Only then, Proust notes, are we reminded of "that chronological reality which under normal conditions is no more than an abstract conception to us, just as the first sight of some strange dwarf tree or giant baobab apprises us that we have arrived in a new latititude."

That brilliant simile--yoking together a scientific tidbit with our intimations of mortality--puts Proust on a higher plane than Alan Ball. Fair enough. Yet Six Feet Under is amazing in its own way, and it passed the ultimate litmus test: it moved me. It caused my moderately jaundiced heart to skip a beat or two. Which is more than I can say for the production of The Threepenny Opera I saw on Saturday afternoon. Confirmed Brechtians will argue that I wasn't supposed to be moved--you know, the old alienation effect in action. But the technical difficulties on display here didn't leave me alienated, either, just pleasantly disgruntled. First problem: despite its flagrant artificiality, Threepenny Opera cries out for a charismatic and scary leading man, who can give Macheath some palpable, non-artificial menace. The gifted Alan Cumming, speaking with a broad Scots accent, was far too cute: you wanted to hug him (although you might want to shower afterwards.) Jim Dale, on the other hand, did Mr. Peachum in a broad Cockney accent. And Nellie McKay, making her debut on Broadway, read her lines in the honey-dipped cadences of an MGM ingenue. This is a problem. So is the erratic tone of the production itself, with its frequent mood swings from pathos to camp to mild titillation (think Love, American Style with a dash of Weimar decadence). 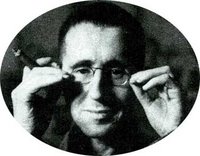 On the plus side, the music fared pretty damn well. What the audience really responded to was Cyndi Lauper (!) singing "Solomon Song" in the second act, precisely because she was allowed to play it straight. And while the latter-day interpreters of "Mack the Knife"--including Louis Armstrong, Ella Fitzgerald, and Frank Sinatra--have turned the song into an anthem of ring-a-ding-ding insouciance, Kurt Weill's melody sounds very different in context, with the whole ensemble trading lines: it's sad, sardonic, and strangely haunting. Which is, I believe, what Brecht had in mind.

Well, nobody said irony would be easy. Hazlitt was already worrying the question back in 1828, when he published his ruminations on Beau Brummell in the London Weekly Review. It was Brummell's dandyish, deadpan wit that intrigued him--the microscopic distinctions, the triviality as comic tinder. In "Brummelliana" (love that title) Hazlitt wrote:

So we may say of Mr Brummell's jests, that they are of a meaning so attenuated that "nothing lives 'twixt them and nonsense":--they hover on the very brink of vacancy, and are in their shadowy composition next of kin to nonentities. It is impossible for anyone to go beyond him without falling flat into insignificance and insipidity: he has touched the ne plus ultra that divides the dandy from the dunce. But what a fine eye to discriminate: what a sure hand to hit this last and thinnest of all intellectual partitions!

Dandy or dunce? There should be a litmus test for that, too.