Literature, as we all know, is supposed to be ailing. Some might even call it moribund. But to judge from the crowd last night at Cooper Union, which snaked completely around the block in a light drizzle, reports of its death have been highly exaggerated. This legion of bibliophiles had turned out to see Orhan Pamuk deliver the first Arthur Miller Freedom to Write Lecture. The Turkish novelist was, of course, an ideal speaker for the occasion, having just dodged a jail sentence for publicly rattling some of the skeletons in his own nation’s closet. Yet the atmosphere in the Great Hall at Cooper Union was far from sober. There were cameras everywhere, and a sort of fizzy anticipation more typical of American Idol than your average PEN event. Indeed, when the three stars of the evening--Pamuk, Margaret Atwood, and Salman Rushdie--entered from stage right, I almost expected them to burst into a Supremes medley, so rapturous was the applause.

Rushdie kicked off the evening (and the PEN World Voices Festival) with a few words of welcome. From where I sat, he was perfectly eclipsed by one of the hall's structural columns. Yet his disembodied voice adverted first to the late Arthur Miller, then to the awards his fellow authors had won. "Orhan is the winner of the heaviest award in the world," he told the capacity crowd. "The IMPAC. You can kill somebody with it." Atwood, on the other hand, had bagged the coveted Swedish Humor Award. (No doubt Rushdie will be picketed for that one, if not actually pelted with dried herring.) On a more serious note, he expressed his hope that the festival "would reopen the dialogue between America and the rest of the world," and turned the podium over to Pamuk.

Given the diffident tone of his prose, I was eager to hear what Pamuk sounded like. His voice was light but assertive, with a Turkish accent and an audible relish for paradox. What he discussed, first of all, were the dark days of 1980, when a bloodless coup by the Turkish military made a hash of civil liberties throughout the country. On that occasion Harold Pinter and Arthur Miller flew into Istanbul as a gesture of solidarity with Turkey's persecuted writers--and their guide, selected for his fluent English, was a young novelist named Orhan Pamuk.

Even then, Pamuk had mixed feelings about this descent into the political trenches: "I felt an equal and opposite desire to protect myself from all this, to do nothing in life but write beautiful novels." He also noted the sad fact that many of the victims of government persecution have managed, a generation later, to turn the tables. "Twenty years on," he said, "half of these same people align themselves with nationalism." Still, he defended freedom of expression as a human necessity--and advised authors not to muzzle their characters, either, in the interest of political correctness. "I am the kind of novelist who makes it his business to identify with all his characters," he insisted. "Especially the bad ones."

This was, perhaps, preaching to the choir. Still, it was a lively sermon. And Pamuk wrapped it up by denouncing the debacle in Iraq, which "has brought neither peace nor democracy" to the region. "This savage and cruel war is the shame of America and the West," he argued. "It is PEN, and writers like Arthur Miller, who are its pride." No mincing words there. The audience rose to its feet, and Pamuk now adjourned to a table in the center of the stage for his conversation with Margaret Atwood. 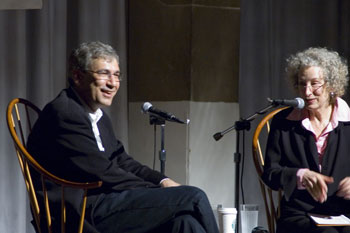 Dressed, like Pamuk, in basic black--they looked like a pair of undertakers--Atwood settled into her chair and removed a list of questions from her tote bag. She began by asking him about the intertwined roles of shame and pride in his fiction. "It is very productive," he replied, "for a novelist to carry around two different ideas." There is, Pamuk added, "a constant civil war in each person's head," and a good novelist inevitably fights for both sides at once. The reader, conversely, should take no side at all. Instead Pamuk prefers to immerse his audience in a productive state of confusion--or, as he calls it, "the entire galaxy of situations."

Next Atwood asked him about the act of composition. What happens when he sits down to write? "The world of telephones and gas bills, the usual tedious details of life, disappear," Pamuk replied. "Leaf by leaf, street by street, window by window, I make a whole new world, in which I feel much more secure than in the world of gas bills and tedium." This sounded like the most glowing endorsement of escapism since J.M. Barrie cranked out Peter Pan. Yet a few minutes later, Pamuk summed up his creative process in more pharmaceutical terms: "I have to be alone every day, and take this pill of the imagination." At that point every novelist in the crowd was doubtless asking the same, envious question: is this pill available over the counter?

Now Atwood moved on to the question of vocation, which Pamuk treated at length in his most recent book, Istanbul: Memories and the City. At Cooper Union, he was more concise: "Bookish boys in my part of the world want to be poets. You have to write bad poetry in order to become a good novelist." But hadn't he, as Atwood put it, undertaken his literary career in order to "write Turkey into being?" Pamuk, who seems like a genuinely modest man, batted away any such grandiosity. "I have described the adventures of my nation in various ways," was all he would say, without acknowledging that you could apply the very same formula to Leaves of Grass or The Divine Comedy.

As an interlocutor, Atwood was perfectly okay. At times I wondered whether Rushdie himself--no novice when it comes to fictional explorations of shame and pride--might have been more in synch with Pamuk, more able to tease out what makes him so distinctive. Yet there was one moment that seemed to comically encapsulate Pamuk's tone, with its murmuring disclosures and meaningful silences. "I'm going ask you a personal question," Atwood said, "but you don't have to answer it." The guest of honor paused. Then he replied: "Okay. If I answer, you don't have to listen."

Comments:
That's a good article, I was rather curious to know about Pamuk's speech in PEN. Thanks.

It's always nice when you can not only be informed, but also entertained! I'm sure you had fun writing this article. Excellent entry! I'm been looking for topics as interesting as this. Looking forward to your next post.
p