Martin A. and Patrick M.

Martin Amis and Patrick McGrath, who appeared at Hunter College this afternoon as part of the PEN World Voices Festival, make an interesting pair. Amis is slight, voluble, his pale hair combed straight back as if he were perpetually facing into a brisk wind. McGrath is bigger, more stout, and as they spoke he tended to bring up the rear. After a brief intro by Salman Rushdie--who's apparently being beamed from one event to another via some sort of Star Trek teleportation device--the two authors quickly took their seats and got down to business.

Initially they continued a conversation that had begun the night before, in the wake of the exhaustive (and, some say, exhausting) Faith and Reason marathon at Town Hall. The various testimonies onstage, Amis said, had convinced him that the quintessential "human quality was doubt rather than passionate commitment." Yet he was unwilling to pull the plug on the entire enterprise of belief. "I do not call myself an atheist," he added. "That would be a little crabbed and immature."

McGrath fired back: "Even if you're an agnostic, doesn't it make sense to do what Pascal said, or did?" Which is to say: hedge one's bets by praying. Amis was unmoved. He fired off an epigrammatic blast of his own: "If God had really cared about us--if he really loved us--he would never have given us religion." Now, however, things got more interesting, as the two non-believers relinquished their game of verbal pingpong and took up the matter of Muhammad Atta, who served as the subject of a recent story by Amis in The New Yorker. (Ironically, Amis suggests that Atta wasn't a believer, either, just a hideous nihilist with a competitive streak.)

From there they moved on to Iran. Amis, who wrote a great deal about the nightmare of nuclear weaponry during the 1980s, insisted that such devices be kept out of Iranian hands. "Sorry," he said. "They just can't have them!" McGrath quite reasonably asked how this was to be accomplished. "By swearing them off yourselves," Amis replied. Not likely, is it? Especially as the current administration announces plans to rebuild existing weapons facilities and commission new bomb designs. But we can always hope.

Meanwhile, after touching on Amis's novel Yellow Dog, head trauma, Abu Gharib, and extraordinary rendition, the conversation drifted back to suicide bombing (which Amis prefers to call "suicide mass murder.") The practice, he argued, is not simply war by other means, but a repellent Islamist specialty, degrading in every possible way. "It makes a human being regard another human being with a brand new level of disgust and revulsion," he insisted. 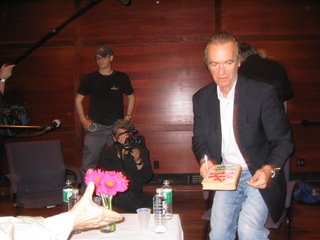 There followed a brief Q-and-A session. One member of the audience cited a comment made the previous night by the Brazilian novelist Milton Hatoum: "We are living in hopeless times." Was it so? "Look," Amis replied, "all times look hopeless. The Nineties, for example, were a kind of Golden Age. We had so much time on our hands that we could devote an entire year to Monica Lewinsky, an entire year to O.J. Simpson." And yet suddenly, as of 2001, we were plunged into battle with a terrible, supremely irrational enemy. "Hopeless times," echoed McGrath, without indicating whether he accepted the diagnosis or was simply taking the phrase for a spin. But now the clock had run out, and both authors retreated toward the back of the stage, surrounded by a praetorian guard of cameras and boom microphones. Amis gamely signed a few autographs, too, at which point I snapped the action photo above.

Comments:
That discussion sounds like a discussion worth discussing, indeed. Amis is always of interest because A) he's not as muzzled by PC cant as the A-list Americans (hard to imagine Updike citing, in phrase or concept, the repellent Islamist specialty)...yet he's not, like fellow exotic The Hitch, compelled as though by Tourettes to stake outlandishly gainsaying claims (I'm surprised The Hitch missed his chance on a Rosa Parks attack-style obituary/expose). He makes good sense, our Mart. Too bad about the double-chasteners of Koba and Yellow Dog...just as it seemed that Experience (his 'Speak, Memory') had elevated Amis to junior Nabokov (so secure in his position that to dismiss him was to discredit one's self), these two miscalculations. There are disturbing clues as to what 'modern' means, culturally, on display when one reflects that Bellow, Martin's picked-as-though-by-matching-height father figure, got away with something as silly as 'Henderson' and lots of savageable stuff besides whereas Marty can't even write a merely-clever book or two without being booed off the stage. 'Modern' these days means, I think, more than anything else: unforgiving. Tough era to have a serious career in self-expression. You can see how jetting here and there to preach to the choir debunking religion with the tool of freshman logic would seem an easy gig, in comparison, for awhile.