Just a few bulletins from around the Web. First, Donald Fagen is interviewed by Newsday's Ira Robbins, in connection with the impending release of Morph the Cat. I just reviewed this morbid but mellifluous production for WBUR, and will post a link to the piece when it goes live. Meanwhile Fagen, looking very youthful (almost Harry Potterish, with that striped scarf), finally makes explicit the hidden connection between Steely Dan and the art of dentistry:

While voters get the politicians they deserve, bands can attract audiences they don't always expect. "When Steely Dan started out, we had a more normative band... So our fans were the usual bunch of psychos, just normal rock fans. The sort of psychos we have now are a much higher class of people." A wry tone creeps into Fagen's voice. "A lot of dentists. Every time I go to the dentist in any city, they've always got plenty of Steely Dan records to play while they're drilling your teeth and producing pain. Whole dental colleges run on Steely Dan music."

Next, Margaret Atwood's goofy book-signing apparatus, which will be officially unveiled this Sunday in London. For a long time I assumed this whole business was a joke--the author's deadpan response to a bad case of Autographer's Wrist. But no, she's deadly serious, according to this piece by Angela Pacienza: 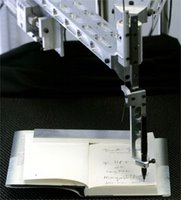 Here's how it works: The author scribbles a message using a stylus pen on a computer tablet. On the receiving end, in another city, a robotic arm fitted with a regular pen signs the book. The author and fan chat via webcam.

Created with book tours in mind, the machine has several other potential applications: enhancing credit card security, allowing doctors to write prescriptions for out-of-town patients, and signing legal forms such as divorce or real-estate documents from another province. The LongPen is also adaptable to hold CDs and hockey sticks, allowing music and sport stars to give autographs remotely.

Oh, wait--I forgot about the hockey stick. I take it all back. This could be the greatest thing since the first Segway rolled off the assembly line.

Finally, the New York Public Library has acquired the compendious and no doubt icky archive of William S. Burroughs, including "draft versions of his most famous work, Naked Lunch, along with other manuscripts and letters that range from the early 1950s to the early 1970s." The AP dispatch is mum on what else might be tucked away in there--snapshots of his cats? leftover Benzedrine?--but somebody is going to have a very interesting time assembling the catalogue. Meanwhile, feast your eyes on this pulpy edition of Junky, ascribed to one "William Lee," whose addictive habits seem to be getting in the way of his personal life. (Update: Edward Wyatt's article in today's New York Times does indeed include more info about the contents of the Burroughs Archive. It also makes clear that the author intended this vast accumulation of letters, manuscripts, photographs, and taped interviews to be regarded as a work of art unto itself, not simply as a scrapbook-cum-compost heap.)

Comments:
What's funny (and creepily Serling) is how all three seemingly disparate topics fit together...Fagen and Burroughs, obviously...and then the mechanical signing arm, which could come right out of old Burroughs or Fagen's next Sci Fi concept album. It's only too bad the book signing pictured wasn't taking place in Yokohama...

Absolutely right--and it hadn't even crossed my mind. Even the robotic arm is a perfect fit.