I know it's been awfully quiet here at HOM. For one thing, I've been bearing down on other projects, and for another, I spent last week in Amsterdam. Nina and I did touch a few touristical bases--the Rijksmuseum, currently under renovation, has boiled its vast collection down to a Greatest Hits show, and you can't really go wrong with Franz Hals, Rembrandt, and Vermeer, plus the biggest goddamn doll house I've ever seen and the mother of all ceramic tulip vases. On a less exalted level, I highly recommend the Glasses Museum at Gasthuismolensteeg 7. Why we ventured over to the Torture Museum I still don't know. I envisioned something lighthearted--with a final room devoted to tickling or Muzak--and instead encountered one grisly innovation after another: rack, thumbscrews, iron maiden, guillotine, and so forth. The curators pipe soothing Baroque music into every room, just to give the whole ghastly spectacle a patina of high culture, and there are period engravings that make Goya's Disasters of War look like a company picnic. No, I didn't buy a t-shirt. Yes, I decided against the miniature hot poker swizzle stick. And I was shocked, genuinely shocked, that the words extraordinary rendition appeared nowhere in the entire, stomach-turning establishment.

Not long ago I found myself thumbing through Trading Twelves: The Selected Letters of Ralph Ellison and Albert Murray, which the Modern Library published in 2000. Back then I was still at Amazon, where I wrote this pint-size appreciation: 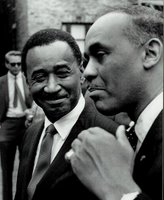 Some friendships spring instantly to life, while others require a lengthy period of germination. The rapport between Ralph Ellison and Albert Murray fits into the second category. Both attended the Tuskegee Institute in the fall of 1935, and while they were never formally introduced, Murray recalls being impressed by his fellow student's formidable intellect, not to mention his snappy wardrobe. It wasn't until 1947, however, that their relationship got rolling. The two shared a love for jazz and photography and the American vernacular, along with a comically skeptical view of the social sciences. They were also joined by a sense of literary vocation that seems truly bracing in our own age of ironic retrenchment: "He and I conceded nothing to anybody," recalls Murray, "when it came to defining what is American and what is not and not yet."

Their intention was to create a "universally appealing American epic." Ellison delivered his epic, Invisible Man, in 1952, while Murray's arrived on the installment plan, parceled out among nine books and three decades. Yet this divergence in their careers, which might have easily divided them into literary turtle and hare, never made a dent in their friendship--a fact amply testified to by the letters collected in Trading Twelves. The title refers to the old custom whereby jazz soloists would lob 12-bar phrases back and forth, upping the ante with each exchange. Murray and Ellison seem similarly energized by their epistolary cutting contest. Here's the latter on the as-yet-unpublished Invisible Man, which he describes in surprisingly gutbucket terms: "For me it's just a big fat ole Negro lie, meant to be told during cotton picking time over a water bucket full of corn, with a dipper passing back and forth at a good fast clip so that no one, not even the narrator himself, will realize how utterly preposterous the lie actually is."

Elsewhere Ellison urges his correspondent to hurry up "that low-down southern cullud jive of yours and spread it all over western civilization," while Murray takes their mutual idol William Faulkner to task: "As for Marse Faulkner, he's good, but he ain't never come to terms with poro & straightening combs, let alone jazz and all that cadillac kick dynamism." Decades after they were written, the letters in Trading Twelves remain an ardent and entertaining conversation about art, politics, race, and the intricacies of what Murray would later call Omni-American life.

Anyway, the bit that struck me the other day was Ellison's pungent remarks about Faulkner and desegregation. The Nobel laureate and jewel in the crown of Oxford, Mississippi, had written a number of articles urging a slower pace on the civil-rights movement. Ellison, who revered Faulkner's fiction, was having none of it. As he wrote Murray on March 16, 1956:

Bill Faulkner can write a million Letters to the North as he did recently in LIFE, but for one thing he forgets that the people he's talking to are Negroes and they're everywhere in the States and without sectional allegiance when it comes to the problem. The next thing he forgets is that Mose isn't in the market for his advice, because he's been knowing how to 'wait-a-while'--Faulkner advice--for over three hundred years, only he's never been simply waiting, he's been probing for a soft spot, looking for a hole, and now he's got the hole. Faulkner has delusions of grandeur because he really believes that he invented these characteristics which he ascribes to Negroes in his fiction and now thinks he can end this great historical action just as he ends a dramatic action in one of his novels with Joe Christmas dead and his balls cut off by a man not nearly as worthy as himself; Hightower musing, the Negroes scared, and everything just as it was except for the brooding, slightly overblown rhetoric of Faulkner's irony. Nuts! He thinks that Negroes exist simply to give ironic overtones to the viciousness of white folks, when he should know very well that we're trying hard as hell to free ourselves; thoroughly and completely, so that we when got the crackers off our back we can discover what we (Moses) really are and what we really wish to preserve out of the experience that made us.

Whew! After this salvo, which should have properly singed the stationary, Ellison moves right on to travel plans, photography, and his longing, during his tenure at the American Academy in Rome, for a "helping of pie and real honest to goodness American ice cream." (Here, by the way, is a piece I wrote about Albert Murray for Salon in 1996.)

Meanwhile, according to this head-scratcher of an AP dispatch, the White House is vigorously defending the way it handled the Hurricane Katrina disaster. At this point, with the administration getting hammered by all sorts of postmortem reports, the president really should be hanging his head. Yet homeland security adviser Frances Fragos Townsend told a conference of state emergency management directors, "I reject outright the suggestion that President Bush was anything less than fully involved." Nobody who saw the photos of Junior studying the catastrophe from the forward banquette in Air Force One will agree--in fact, almost nobody in the entire country, Democrat or Republican, will agree. So what? This smiling defiance of reality is par for the course. If you don't believe me, just check out an alarming paragraph from Jonathan Raban's excellent collection of post-9/11 journalism, My Holy War. Here Raban is quoting from Ron Suskind's New York Times article of October 17, 2004, in which a Bush aide finally puts his Platonic cards on the table:

The aide said that guys like me [Suskind] were "in what we call the reality-based community," which he defined as people who "believe that solutions emerge from your judicious study of discernible reality." I nodded and murmured something about enlightenment principles and empiricism. He cut me off. "That's not the way the world really works any more," he continued. "We're an empire now, and when we act, we create our own reality. And while you're studying that reality--judiciously, as you will--we'll act again, creating other new realities, which you can study too, and that's how things will sort out..."

The source of this sinister, smug, and deeply idiotic quote is not identified. Maybe it was the guy who forgot to secure that hunting license for Dick Cheney.

Comments:
The terrible poignance of Ellison's line, "....we're trying hard as hell to free ourselves; thoroughly and completely," is almost unbearable in light of the fact that he wrote it almost exactly 50 years ago...but might just as well have written it tomorrow.