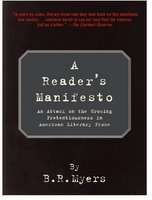 You learn something new every day. This morning I was taking a breather at the Mercantile Library and happened to pull B.R. Myers’s A Reader’s Manifesto from the shelf. I read the first installment back in 2001, when it appeared in The Atlantic, and had to agree with at least some of the thwacking that Myers administered to contemporary American prose. (Cormac McCarthy, for example, has always struck me as pure cornpone.) Yet I skipped the second installment, which ran in a later issue of the magazine. Only today, then, did I discover that Myers took me to task as well.

My moment in the sun comes on page 78. On the previous page, Myers is busily dumping on David Guterson for setting the following words to paper: "They rode back all day to the Columbia, traversed it on the Colockum Ferry, and at dusk came to their orchard tired, on empty stomachs, their hats tipped back, to walk the horses between the rows of trees in a silent kind of processional, and Aidan ran his hands over limbs as he passed them with his horse behind him, the limbs trembling in the wake of his passing, and on, then, to the barn." According to Myers, this is precious fakery:

The very reference to "limbs trembling" behind Aidan’s back (limbs of trees that is; "branches" would have been clearer but too prosaic) is there purely for sound and rhythm. Granted, everything is botched by "on, then, to the barn"--but you get the principle. And never let it be said that this stuff doesn’t work. James Marcus, one of the in-house critics at Amazon.com, praised the above excerpt for offering readers "miniature lessons in patience and perception."

Whoopee! I get to be a target in the B.R. Myers Shooting Gallery, along with Don DeLillo, John Updike, Toni Morrison, Rick Moody, etc. But seriously, folks: for Myers, "sound and rhythm" are dirty words, the enemies of good clean sense. I have as little appetite as he does for inflated rubbish. Yet I do enjoy the echo of "passed" and "passing," assume that Guterson used "limbs" to anticipate the field-surgery episodes later in the book, don’t find the ending such a botch--and still admire the sentence (which is more than I can say for a good many other sentences in East of the Mountains.) I think its dilatory charms are simply lost on Myers, who, for all his wit and icon-smashing dexterity, tends to approach English sentences like an efficiency expert. Prose is not always a matter of speed and sinew. Sometimes there is dawdling, delay, peripheral humor, and even (perish the thought) repetition. Mozart is fine, but let’s leave room for Mahler. Not to mention Morris Day.

Comments:
Dusty Orwellian Rigor, meet Anal American No-Nonsensism! Kommissar Myers’ middlebrow strictures are arguably less interesting than most of the work he chastises for being so vulgarly…interesting. The sentences in a work of fiction should conspire not only to make sense but music, too. Or should we burn our Henry Miller and stock up on extra Maugham (the middlebrow doorstop) just to make Myers scowl with pleasure? Funny that the plastic arts shook off such critical fallacies nearly a century ago…can you imagine a ‘serious’ contemporary art critic admonishing Lucien Freud to knock it off with all those extraneous squiggles? We can admit that a painting IS its style…why can’t we be as enlightened with books? Or, no, maybe Cezanne’s Still Life with Apples…is ABOUT…apples.

Between style scolds like Myers and McMFA writing programs churning out tons of cookie-cutter shelf-filler…sheesh.

I wonder if anyone has ever taken Myers' argument to task from the perspective that perhaps people who can't read some of the denser fiction out there--the Delillos and the Pynchons, et al--may in fact actually be the sorts of poorly trained, unimaginative, "unable-to-grasp-or-understand-difficult-fiction" sorts of people that Myers claims he is defending?