More proof that I'm getting old

"Many people I know in Los Angeles," writes Joan Didion, "believe that the Sixties ended abruptly on August 9, 1969." Winsome conversative Hugh Hewitt has a different take: "The Sixties ended on September 11, 2001, but they were interred on the morning of November 3, 2004." Then there are people like me, for whom the Sixties have yet to end. Exhibit A, which I bought at the supermarket a couple of weeks ago for $6.99: Ram. I hadn't listened to Paul McCartney's sophomore effort in years. Yet I spent many happy adolescent hours playing the thing on my father's high-end stereo, relishing all of Macca's production tricks, which sounded like the last gasp of Abbey Road. Anticipating a Proustian moment, I loaded the tunes onto my iPod. Proust had set the bar very high, of course: one bite of a soggy cookie sent him straight to Nirvana. "I had ceased now to feel mediocre, contingent, mortal," he writes. "Whence could it have come to me, this all-powerful joy?" Macca was a little less overwhelming. He had reached deep into his bag of sonic tricks--note the delicious ukulele on "Ram On," the homespun, bluesy guitars on "Three Legs," even a bit of bucolic scatting on "The Heart of the Country." At least half the lyrics could be taken as oblique commentary on the decline and fall of the Beatles. Yet there's something arbitrary, almost accidental, about the whole thing. Macca does what he does. I don't mind his gift (his genius, really) for sugarcoating. The problem is that he keeps forgetting to put the pill inside. Oh well, tempus fugit, etc. It didn't prevent from enjoying this excellent, relatively recent interview with Sir Paul himself, where he takes his own trip down memory lane to the glory days of 1964:

I remember drinking way too much, and having one of those talking-to-the-toilet bowl evenings. It was during that night, when we'd all stayed up way too late, and we got so pissed that we ended up crying--about, you know, how wonderful we were, and how much we loved each other, even though we'd never said anything. It was a good one: you never say anything like that. Especially if you're a Northern Man. 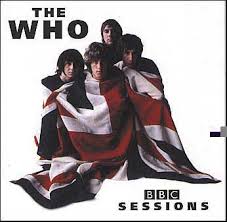 Me, I'm a blubbering Southern Man, and it was yet another sentimental impulse that caused me to buy The Who: BBC Sessions. These guys were the real heroes, the avatars, of my teenage years. They explained the inner workings of angst to me. Once, after a romantic disappointment, I walked home and wrote Love, reign o'er me with a gloved finger in the snow. (Glad I got that one off my chest.) Unfortunately, the best material here is also available on Live at Leeds--still alarmingly high on my personal rotation--and these versions sound like they were recorded on a Dictaphone. I sympathize with the old trouts at the Beeb, who must have regarded the Who's blitzkrieg attack as a technical challenge. But in the end this is for completists only, who can't live without the hilarious commercial spot the band recorded for the BBC, set to the tune of "My Generation."