Just a few odds and ends. It appears (according to the St. Petersburg Times) that Russia is beset with an epidemic of fake books--not pirated editions, but slapdash productions attributed to famous authors. My favorite example, evidently a hot item in Kiev's street-market bookstalls:

Its title, The First Merovingian, referring to a Dark Ages European dynasty that according to myth descended from Jesus, hinted of a classic [Dan] Brown story line. The book was written in response to a request that Pope John Paul II had made just before his death, a blurb on the jacket said. On the back of the attractively bound 511-page volume was a photo of Brown.

But when readers opened the hardcover book, they were sorely disappointed. A crude cut-and-paste job, it contained lengthy excerpts from histories of Christianity and the Inquisition interspersed with selections from a 14th-century anthology of short stories.

"This wasn't an 'honest' pirate edition," said Nikolai Naumenko, editor in chief at Brown's Russian publisher, AST, which also publishes such American authors as John Grisham and Michael Connolly. "I cannot even describe it as a book. It's trash."

Most of these literary ringers originate in the Ukraine, where any distinction between "honest" and "crooked" pirate editions has broken down completely. AST, by the way, happens to be the Russian publisher of Amazonia. I'm assuming the Russian version won't simply consist of some old Forbes articles about the Internet bubble and a public-domain history of the steam engine. 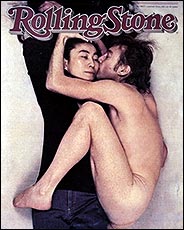 As reported in the New York Times, a panel of 50 editors and art directors has chosen the best magazine covers ever. Number One: the famous Rolling Stone photo of a fetal, naked John Lennon curled around his wife's waist. Number Two: the famous Vanity Fair photo of a naked, pregnant Demi Moore. Do we see a pattern here? Is the essential ingredient a celebrity who has shed his or her clothing? Coincidentally, I've always been put off by these very images. The Rolling Stone cover, a study in infantile regression, mainly reminded me of the steep decline in Lennon's post-Beatle output. (If he chose the perfection of life over the perfection of art, that's fine. But the records were pretty bad.) As for Demi Moore--if I need to study a narcissist in the nude, I'll go look in the mirror. Number Three, FYI, was an Esquire cover of Muhammad Ali being peppered with arrows, but I believe he kept his pants on. Finally, Timothy Wu addresses the GooglePrint uproar in Slate. Like most GooglePrint enthusiasts--and Wu unquestionably falls into that camp--he views recalcitrant authors as control freaks, who want to retain an iron grip on their copyrights even at the cost of making their work invisible to the great world. He also seems to take Google's vaunted corporate motto (Don't be evil) at its word. I'm sure the company's fabulously rich proprietors uttered it in earnest--but a corporation with a market cap of almost $86 billion tends to play by its own rules. Who knows what use Google will ultimately make of its titantic textual database? That's the question that strikes terror (or at least unease) into the hearts of authors. Wu responds: "In the end, it is just a search, not a replacement product. We readers need help finding what exists, and we authors also need help being found. There is here, as anywhere, such a thing as too much control." Despite my caveats, the article is a notably intelligent take on a complicated issue: go read it, is my advice.

Comments:
Here I do not agree. My opinion is that John Lennon's music, especially the lyrics, evolved after the Beatles, leaving behind the excessive melodic/teenager side.