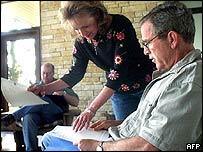 Thus did George W. Bush characterize Harriet Miers, his current nominee for the Supreme Court, as reported in this June 2005 Washington Post profile. Miers, age 60, has had a long career as a commercial litigator at Locke Liddell & Sapp, served one term on the Dallas City Council in the late 1980s, and chaired the Texas State Lottery Commission from 1995 to 2000. The latter gig put her smack dab in the middle of a rather fragrant scandal, which you can piece together from this summary (on Will Bunch's Attytood blog) and this 2001 Guardian piece by Greg Palast. Not surprisingly, her ties to W. go back more than a decade. In 1994 she worked for Bush's gubernatorial campaign, where she vetted his moth-eaten National Guard record and the potentially troublesome recollections of former Texas House Speaker Ben Barnes. A year later, Miers represented the governor in a legal dispute over an East Texas fishing house. And in 2000, after Bush became president, he brought his personal attorney to Washington, first as staff secretary, then deputy chief of staff, and ultimately as White House counsel. In all of these capacities, Miers has earned a reputation as a detail-oriented, close-mouthed loyalist. Whether any of this makes her Supreme Court fodder is (to put it gently) debatable. But one thing is clear. Having just weathered a firestorm over a previous bit of cronyism--his appointment of Michael Brown to run FEMA--Bush is determined to, you know, stay the course.