Connolly on Sterne, Jarrell on Kitten, Updike on the Nobel

When I posted an item about the new Tristram Shandy movie the other day, I had a sudden urge to read an old, half-remembered essay on Sterne by Cyril Connolly. Needless to say I couldn't find the book amidst the shambles of my personal library. But yesterday the familiar, beige-and-red spine of The Selected Essays of Cyril Connolly materialized on the top shelf, and I grabbed it. The piece is notable for two reasons. First, it captures to perfection the queer (in the older sense of the word), whimsical, lollygagging flavor of the book. Also: Connolly was only 23 when he wrote it. At twice his age I'm only half as articulate--if even that--and if I thought about this for too long it would drive me to despair. Instead, here's a superb bit:

Within his limitations, however, his world is one of the most wayward and serene of all Utopias, and if the quality of his work is taken from the French, its material is as undoubtedly English, the England of peaceful fanatics, and gaunt unpersecuting bigots who have taken refuge from the fogs of the world in the most outrageous sanctuaries of their teeming minds, and who seem to spring up in the peaceful country as naturally as teazels and to live here as happily as rare animals in private parks.

The intensity that Sterne lacked in emotion he retrieved in style, and there is hardly any diction in English so perverse and yet so adequately under control. The tempo of Tristram Shandy, for instance, must be the slowest of any book on record, and he reminds one at times of the youthful occupation of seeing how slowly one can ride a bicycle without falling off; yet such is Sterne's mastery, his ease and grace, that one is always upheld by a verbal expectancy; slow though the action moves, he will always keep his balance and soon there will follow a perfect flow of words that may end with a phrase that rings like a pebble on a frozen pond.

What a killer! I am, incidentally, completing a novel of my own, with what I fear is an even slower narrative tempo than Sterne's--and thanks to Connolly, I now see myself puttering along on a battered Schwinn Varsity, crashing to the ground every five feet or so. Not a pretty picture. 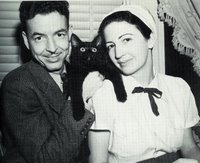 This morning, while I was drinking coffee--I've reverted to the Bodum, or as I now call it, the Freedom Press--I started flipping through William Pritchard's Randall Jarrell: A Literary Life. I reviewed this book approximately 100 years ago in the VLS. I've always been struck by its strangely diffident tone. The author plainly admires Jarrell, yet he spends a good deal of time backpedaling, qualifying, putting things in context (which is often code for special pleading.) In any case, I enjoyed the part about Jarrell and his cat:

One entanglement he thoroughly and joyously capitulated to was his beloved cat, Kitten. It is easy, perhaps too easy, to say that he, Kitten, was all the child Jarrell ever needed; having said it, one feels slightly embarrassed, and partly on Jarrell's account. Yet the intensity of his feeling for this black Persian cat was revealed so often and so unabashedly (Kitten is one of the principal characters in the index to Jarrell's letters) that to be simply embarrassed in the face of it is to be unimaginative. When, during his army service, Mackie sent him some pictures she had taken, Jarrell wrote back, saying he was delighted, had looked at them over and over, and that "I want some more of Kitten and some more of you." The order of request is perhaps insignificant, but a later letter, after further pictures had arrived, suggests that Kitten was stiff competition for any mere wife.

"Your pictures of Kitten," writes Jarrell, "are wonderful. The best one, one of the best photographs I've ever seen, is the one of Kitten walking in the alley across the street. The dark glowing look he shares with the trees makes it look as if it ought to be called Kitten in Fairyland[...] The one of Kitten eating alone on the front porch has such a patterned texture (to Kitten's fur, I mean) that it's hard to believe it's not a painting."

Here Pritchard's tone is just right: tolerant, bemused, etc. I'm no one to talk, by the way. The cat in this household (his name is Allen) does exactly what he wants and is almost as spoiled as Kitten was.

Finally, Updike is interviewed by Bill Zwecker in the Chicago Sun-Times. He holds forth on a number of topics, including his own decreasing itch to write: "There's a danger of overstaying your welcome in the arts. We all have a kind of moment of bloom--when we're really fresh in what we're saying, things that stick in people's minds. It tends to occur, alas, before you're 30." Fascinating, in that the famously precocious Updike got better--deeper, funnier, less flashy--as he moved into his middle-aged prime. The latter two Rabbit novels make the first two look callow. The Bech franchise, featuring the author's Jewish-American döppelganger, also improved with each installment. So did the big fat critical books. Anyway, Updike also puts in his two cents on the Nobel sweepstakes:

It would be wonderful to win [the Nobel Prize], the odds are pretty slim. I'm getting too old for it at 73. Usually it goes to people in their 60s, though I was happy to see Pinter win, given he's two years older than I am. So hope springs eternal.

Comments:
Good news about your novel. I suspect it'll be a pretty picture in the end.