Yesterday I got a copy of Lewis M. Dabney's Edmund Wilson: A Life in Literature in the mail. Wilson is somebody I've tended to underestimate. I forced myself to read To the Finland Station as a college freshman, and it went right over my head, possibly because of my roots in the Marxist enclave of Scarsdale, New York. My next impression of him was formed by The Nabokov-Wilson Letters, where he operated at a distinct disadvantage: compared to VN's Fabergé friskiness, who wouldn't sound a little plodding? He seemed naive, too, in his dogged insistence that Lenin was a big-hearted humanist, rather than one more butcher in a pince-nez. But Dabney's formidable bio looks like the perfect antidote to my ignorance. 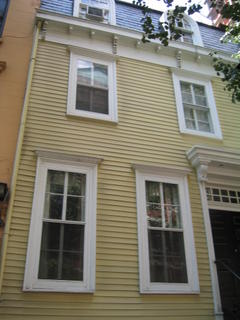 Flipping through it this morning, I came across a chapter about the death of Wilson's second wife, Margaret Canby. (He was to marry two more times.) After a rocky time together--par for the course, it seems--Maragaret went out to California to cool off, and there she died after falling down a flight of stairs. Wilson, tortured by guilt and loneliness, moved his possessions into a new house at 314 East 53rd Street. "This musty-smelling place," writes Dabney, "with 'lumpy and rubbed yellow walls,' amid the noise and grime of the slums--ironically, it would survive among the distinguished private homes on this street--was, until mid-decade, his base of operations."

Hmm. I was pretty sure I knew exactly which building Dabney was talking about, since it's just around the corner from my apartment. On the way back from the gym (pale, crumpled, looking like a candidate for the Emergency Room) I detoured around the block. Sure enough, there it was, with a reasonably fresh coat of yellow paint on it. According to a plaque on the adjacent house, both were built in 1866. Directly across the street is Serena's Psychic Gallery and the Maracas Mexican Bar and Grill. Next door, an enormous crane and the nether parts of what will become an enormous residential skycraper, sure to blot out what's left of the yellow house's light. The mere presence of a wooden house in Manhattan is a touching thing. You can't quite believe that anything so pliable, so subject to mould and termites and fibrous decay, could possibly survive here. The fact that Wilson suffered such miseries within makes it even more touching. The noise and grime are still here. The slums are gone.

Comments:
My husband spent our month upstate reading Upstate and found in it a reference to a summer dinner party Wilson gave for a young English prof at Hamilton. (We were staying near there, too.) Sure enough, the prof. is now emeritus at Hamilton & he gave a delightful, wry, and happy response to my husband's little email "hello."