The dignity of decay

Here's Joseph Brodsky chatting with Sven Birkerts back in 1979. The subject is Venice, whose ample and aqueous charms the poet would later chronicle in Watermark. The main thing about Venice, explains Brodsky, "is that the place is so beautiful that you can live there without being in love." He goes on to explore the diminishing effects of all that beauty, which is intertwined with the city's perennial, time-lapse decay:

It is interesting to watch the tourists who arrive there. The beauty is such that they get somewhat dumbfounded. What they do initially is hit the stores to dress themselves--Venice has the best boutiques in Europe--but when they emerge with all those things on, still there is an unbearable incongruity between the people, the crowd, and what's around. Because no matter how well they're dressed and how well they're endowed by nature, they lack the dignity, which is partially the dignity of decay, of that artifice around them. It makes you realize that what people can make with their hands is a lot better than they are themselves. 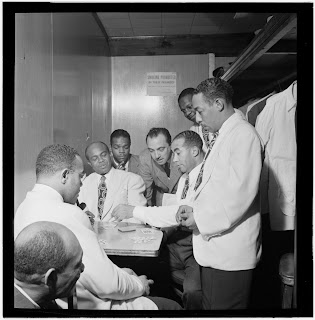 Ever since I came across this tremendous photo, I've been on a Django Reinhardt jag (the latest one, anyway). It dates from 1946, when the Gypsy wizard made his only visit to the United States and toured with the Duke Ellington Orchestra. In the photo, Reinhardt watches several of the band's virtuosi play cards, while the great Johnny Hodges works on his patented expression of boredom. As a guest artist, Reinhardt wasn't obliged to don the white jacket and playful tie. Nor, supposedly, could he handle the colorful boxer shorts worn by his American colleagues. Discovering these florid undergarments during a train trip with the band, he dropped by Ellington's compartment to ask about them--and found the maestro sporting an even gaudier pair.

Reinhardt expected to be greeted as a celebrity in America. For that reason, he didn't bother to bring one of his trademark Selmer Modèle Jazz guitars with him--surely he would be showered with instruments by American manufacturers. He was not. The disappointed Reinhardt made do with borrowed Gibson L-5, an amplified hollow-body whose fat sound was worlds away from the cutting, silvery Selmer. He considered the American guitar a giant step down, and practically swooned with gratitude when his manager showed up with the Selmer several weeks later: "At least it's got tone, you can hear the chords like you can on the piano. Don't talk to me any more about their casseroles--their 'tinpot' guitars! Listen to this, it speaks like a cathedral!" (The latter quote, along with the anecdote about the undies above, comes from this fascinating site.)

In any case, Reinhardt worked wonders with the casserole. Two of his performances with the Ellington orchestra were recorded onto acetate disks, and one of them--at the Civic Opera House in Chicago on November 10--is unusually crisp and vivid for the era, thanks to the use of overhead microphones. You can hear Django's entire four-song set on Duke Ellington: The Great Concerts, Chicago 1946 (Nimbus). But his scintillating take on "Honeysuckle Rose" is also available on this YouTube video. Listen to him adapting his style to the amplified instrument, with much less vibrato and a stripped-down approach to harmony (on the acoustic, he's always buttressing his single-note fireworks with chordal accents). Check out the roller-coaster runs at 1:01, and the sheer suavity of his sound. Reinhardt hung around Manhattan for a couple of weeks when the tour was over, performing at Cafe Society Uptown, and expressed interest in playing with the bebop vanguard, including Dizzy Gillespie and Charlie Parker. Neither were in town at the time (just imagine Parker and Reinhardt trading fours, not to mention the cloudy acetates that would have long since become a jazz collector's Holy Grail.) A number of promised engagements in California fell through. And meanwhile, Reinhardt had found America itself wanting. Charles Delaunay, the guitarist's manager and eventual biographer, put it this way:

When I asked him later for his impressions of America, Django seemed to me to have lost most of his illusions. He was far from impressed by the American mentality, above all that of the women. Even the cars no longer had their old appeal for him; they were all too much alike.

The bit about the cars is particularly poignant. Clearly the Art Deco curves and chrome accents of the previous decade had turned Django's head. If he had stuck around two more years, he could have seen the sui generis 1948 Tucker Torpedo roll out of the showroom. Instead the disillusioned guitarist sailed back to France in early 1947, never to return.

Just as there is no reason to start blogging, there is no reason to stop. So I'll get rolling again with two savory snippets. First, an observation: there are moments when the writing life seems like a parade of small degradations. Can any other profession take such a toll on the ego? Well, yes. This is from William Knoedelseder's I'm Dying Up Here: Heartbreak and High Times in Stand-Up Comedy's Golden Era. The year is 1977, and Richard Lewis is on the road, opening for Sonny and Cher. The golden duo is paid up to $175,000 per night, while Lewis is on a weekly salary of $500. No, that's not the degrading part. This is:

At the state fair in Harrisburg, Pennsylvania, he had to perform outdoors at 4:00 PM with a roller coaster running full bore behind him and circus animals being paraded around a race track between him and the audience. He was supposed to do thirty minutes, but the distractions were so extreme that he raced through his routine and bolted from the stage after ten minutes, sure that it meant the end of his career. He was consoled by a grizzled patron who told him, "Trust me, kid. Bill Cosby was here last week, and he only did fifteen minutes."

Next up, E. Howard Hunt. To be honest, I'm not shedding any tears for this fixture of Richard Nixon's Praetorian Guard and goon squad. I don't really care about his self-esteem. Yet I experienced just a hint of fellow feeling when I read about his 1972 visit to ITT lobbyist Dita Beard, who had implicated the Nixon Administration in some antitrust monkey business. Beard was in a Denver hospital, being "treated for a heart ailment" (if you believe Time) or simply keeping her head down. Hunt's mission was to pressure her into retracting her story. Here's the account from Mark Feldstein's Poisoning the Press: Richard Nixon, Jack Anderson, and the Rise of Washington's Scandal Culture:

Hunt was warned to approach Beard in a physical disguise with a phony ID because "we don't want you traced back to the White House." To pay for his expenses, he was handed an envelope filled with cash from Nixon's reelection campaign: his flight to Denver was booked by a White House secretary. Hunt arrived at Beard's hospital room near midnight wearing makeup and an ill-fitting reddish brown wig, his voice disguised by an electronic alteration device provided by the CIA. The not-so-covert operative looked "very eerie," Beard's son remembered, with his hairpiece on "cockeyed, like he put it on in a dark car."

Actually, the cockeyed toupee would seem to be the most normal part of Hunt's outfit. Reading about these Keystone Kops antics, you don't know whether to be amused or horrified--this was the so-called unitary executive in action. Hunt went on to serve 33 months in prison for his role in the Watergate burglaries, then wrote a gazillion spy novels after his release. (Gore Vidal reviewed a baker's dozen of Hunt's novels in this 1973 essay, along with, uh, related titles by Arthur Bremer and Tad Szulc. NYRB subscribers only, alas.)

And now for something completely different. My review of We Were There: An Eyewitness History of the Twentieth Century recently appeared on the The Book, a literary blog launched last year by The New Republic. I enjoyed this composite portrait, but grumbled about the editor's U.K.-flavored favoritism:

It is also no surprise that Fox views the century through a British lens. There is no need to complain about the preponderance of English voices, not when the likes of Robert Graves, Evelyn Waugh, Robert Byron, Ronald Blythe, Gertrude Bell, George Orwell, and James Fenton are in the choir. Still, it is a little strange to see Britain’s reconquest of the Falkland Islands in 1982 trotted out as a major event of the century and "the last of the British imperial wars." Why not include the American invasion of Grenada the following year, or the toppling of Manuel Noriega and his capture as part of Operation Nifty Package (really) in 1989?

Labels: E. Howard Hunt, Richard Lewis, We Were There