Despite my shy and reclusive nature, I'll be appearing at 6:00 PM this Sunday, April 25, at the Jalopy Theater in Brooklyn. The stars of the show are David Hajdu, reading selections from Heroes and Villains, and Karen Oberlin, doing the vocal voodoo that she does so well. But I'll be supplying grace notes on the electric guitar and lap steel, along with my fellow sideman Seth Fahey on bass and clarinet. God willing, I'll also be singing on one song--something not heard in public since the early days of the Reagan administration. You can see three-quarters of the ensemble in this photo, taken by the very able Tom Stoelker, on a zany rooftop construction of girders and water pipes that resembled a set for Love, American Style. 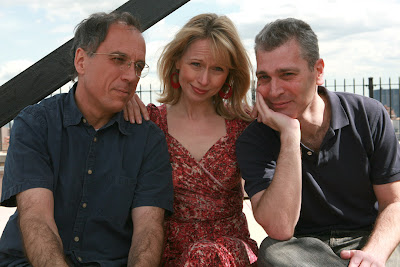 If you're concerned about my singing (I certainly am), just bear in mind this bit from Jan Swafford's Charles Ives: A Life in Music. As a child, Ives was urged by his father to appreciate the rough-hewn aspect of amateur performance. Referring to an acquaintance's tuneless bellowing at a camp meeting, George Ives told his son: "Watch him closely and reverently, look into his face and hear the music of the ages. Don't pay too much attention to the sounds--for if you do, you may miss the music. You won't get a wild, heroic ride to heaven on pretty little sounds." Swafford goes on to add:

His father's cues turned those experiences of amateur music, especially hymn singing, into some of the elemental impressions of Charles Ives's boyhood. He could not separate the music on the page from the way people sang or played it. Even the coarseness of amateur performance seemed to Ives a sign of authenticity. The mistakes were part of the music; sometimes the mistakes were the music of the ages.

Perhaps I'm raising the bar too high here. In any case, come one, come all! It should be fun.

Comments:
Sounds like you're going to have a blast. You have a fine, raspy voice. I recall the Regean era. Don't be afraid to belt it out. Sorry to miss it. --Gin

Thank you for the positive reinforcement. I'll let you know how it goes....