With alarming frequency, I have dreams in which I'm prepping for a musical performance, then show up for the actual event with no idea what I'm doing. This is, of course, just one more variation on the panicky, deer-in-the-headlights dream that most sentient human beings have from time to time. But I have it often, and in fairly grandiose forms. Sometimes I'm supposed to have composed an entire symphonic piece, something dense and gnarled and Mahlerian, with a long orgasmic adagio at the end. I have, in the dream, a very detailed sense of the music and am looking forward to conducting it, scrunching up my face in that Leonard Bernstein fashion during the big brass fanfares but mainly smiling. On other occasions I'm playing in a rock band. At least once that I can remember, I was in the Beatles. Sadly, I can't recall whether I was a fifth Beatle, in an intrusive, parasitical, Murray-the-K kind of way, or whether I was being welcomed aboard with full Fab Four privileges. (Come to think of it, there's a third option: I could have been a temp, a white Billy Preston.) But at the moment of truth, when the audience has filed in and the lights have gone down, I realize that I've screwed up. I can't do it. Either I fudge my way through the opening bars or wake up with a powerful sense of disappointment. Oh, I'm often partially dressed or naked during that final sequence. I never said I was subtle. 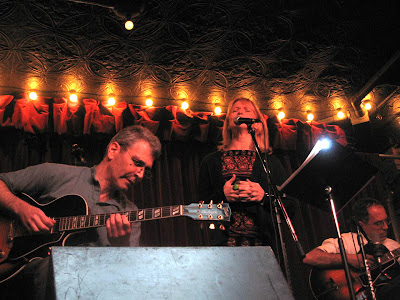 Anyway, I kept my clothes on during the Jalopy gig last night. And despite the lack of rehearsal, and the sometimes mushy groove, and my failure to cue Seth Fahey for his clarinet solo on "Mistress and Maid" with a brisk, whiplash-inducing snap of my head, it was still pretty fun. I got through my vocal performance with only one botched line (I think). In the photo, I'm looking at some sheet music on the floor, trying to figure out exactly where we are. Karen has her hands locked together in a prayerful, Mahalia Jackson manner and is probably punching out "My One and Only Love"--the kind of song I would have considered sheer treacle in my foolish youth but now adore. It's funny, that softening of sensibility, which comes from an increasing sense that people are delicate constructions and that you don't need to poke them in the ribs to communicate. I'll get back to that. The brief film clip below is from "Dream A Little Dream of Me." Again, the Mamas and the Papas recorded this Thirties chestnut as a campy frolic, and something odd happened: it came out straight and strangely heart-lifting, with its wistful adumbration of fading stars and sunbeams and sycamore trees. We did it faster, and the clip includes just a little bit of my guitar solo.

And what, you ask, does Charles Ives have to do with this? Well, last night, after beating a quick retreat from the theater, and after Nina and Nat and Caroline and Kerry told me it really hadn't gone that badly after all, I opened up Jan Swafford's biography again. I was hoping to find some more material about the hidden charms of amateur performance. Screwing up is good, right? ("A man of genius makes no mistakes," wrote Joyce, in a passage I memorized as a teenager, never imagining it would come in so handy as I pondered the daisy chain of mistakes that more or less makes up my life, forgetting that this get-out-of-jail-free card applied only to men of genius. "His errors are volitional and are the portals to discovery.") Instead, what I found in the Ives was this paragraph from the introduction the composer wrote to 114 Songs. Some of the items in this collection are virtually impossible to sing. Even Yma Sumac would have bowed her head and cried at the impacted tone clusters of "Majority." But Ives, his tongue firmly in cheek, defends the right of a song to be unsingable:

A song has a few rights, the same as other ordinary citizens. If it feels like walking along the left-hand side of the street, passing the door of physiology or sitting on the curb, why not let it?... Should it not be free at times from the dominion of the thorax, the diaphragm, the ear, and other points of interest? If it wants to beat around the valley, to throw stones up at the pyramids, or to sleep in the park, should it not have some immunity from a Nemesis, a Remeses, or a policeman? Should it not have a chance to sing to itself, if it can sing?... If it happens to feel like trying to fly where humans cannot fly, to sing what cannot be sung, to walk in a cave on all fours, or to tighten up its girth in blind hope and faith and try to scale mountains that are not, who shall stop it?

Who indeed? Don't look at me.

Many thanks, Ben! BB meets Bernie--I'll spend the next few years trying to live up to that. Meanwhile, yes, the Ives intro really did hit the spot.

nice article . i am so happy for read it .

I think this is among the most vital info for me.
And i am glad reading your article. But wanna remark on few general things,
The website style is great, the articles is really excellent 메이저사이트

I do trust all of the concepts you have presented to your post.
They’re very convincing and can certainly work. 바카라사이트

I like the valuable information you provide
in your articles. I’ll bookmark your blog and check again here frequently. 온라인카지노