I thought I had sworn off the whole Walcott mess--and really, I have, aside from this gossipy codicil, which surfaced in the Evening Standard last night. Readers will recall that John Walsh not only campaigned on Ruth Padel's behalf but also dredged up Walcott's record of harassment in the Independent. Now it seems that his relationship with Padel, to whom he referred as "my friend," has been rather more intimate than that. According to the paper: "Rumors have long abounded that Walsh's relationship with Padel has, in the past, been a close one. Readers of Padel's collection The Soho Leopard suggest the devilish lover in fake Armani is none other than the Independent writer himself." Indeed. Here's a specimen of the poem in question, although the identity of the speaker is certainly fluid, and may include the poet herself:

I was never your devoted lover. It was gossip,
That. All wrong, I am the Amur leopard no
One knows about, the thirty-fifth; each eye
An emerald. I'm passing by Quo
Vadis, St Anne's Court and Sunset Strip

On a summer evening trembling--water muscle
Breaking on the knife--
Edge of a dam--with promises of headlong
Encounters that might change a life.

If Walsh is Padel's ex-lover, that doesn't bar him from speaking up on her behalf. But a little more transparency might be welcome--perhaps a heart-shaped dingbat in the margin of his column. Meanwhile, he has backpedaled just a bit from his earlier assault on Walcott. "I'm sorry he's withdrawn," Walsh told the Evening Standard. "I just thought it was worth bringing up that, while he is a brilliant poet, his attitudes towards teaching poetry to young people--with a relationship that was overly close--were wrong. It was a moral rush of blood to the head."

To change the subject, at least for a few minutes: I just read a fascinating Frieze piece by Jace Clayton in defense of Auto-Tune. I'll let the author explain what he's talking about:

The most important piece of musical equipment of the last 10 years is not an instrument or a physical object. It's called Auto-Tune and is used on roughly 90 per cent of all pop songs. It is what's known as a 'plug-in,' a specialized piece of software made to be inserted into other, bigger pieces of audio software. Auto-Tune bends off-key notes into pitch perfection. 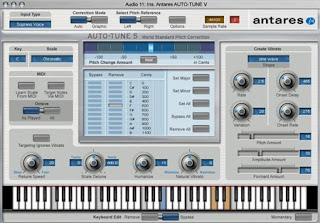 Of course I knew about the existence of Auto-Tune, and that it was used even by artists with quasi-perfect pitch (check out this recent dust-up between Billy Joel and the pugnacious Ed Champion, who needled the singer for touching up a performance of the national anthem). But I didn't realize how pervasive it was. And yes, off the top of my head, I would have considered it a crutch--a crude cosmetic for vocal blemishes. Clayton argues that in the hands of its most skilled practitioners, Auto-Tune is simply one more expansion of the palette. The human voice is not at war with this vaguely robotic technology. It's "more like glossy coexistence, a strange new dance of give-and-take," with the performer and the algorithm following each other's lead.

I was immediately reminded of the ancient prejudice against microphones, which were also once regarded as a form of cheating. As Gary Giddins pointed out in the first volume of his massive Bing Crosby biography:

According to an old theatrical shibboleth, an entertainer who could not project to the balcony's last row was not ready for the big time; Jolson exemplified the leather-lunged belter of songs. With the arrival of the microphone--and the instant exit of the preposterous megaphone--a new and more intimate kind of singing for larger audiences was made possible. Technology changed music. Ironically, mechanics led to a more human and honest transaction between singers and their listeners.

For me, the analogy holds until the last sentence. Which is to say that the microphone allowed greater intimacy between the audience and the singer, whose very intake of breath was now part of the performance. Whereas Auto-Tune still strikes me as distancing device, with the performer's humanity appearing in galvanizing glimpses. But Clayton makes the opposite argument:

Rather than novelty or some warped mimetic response to computers, Auto-Tune is a contemporary strategy for intimacy with the digital. As such, it becomes quite humanizing. Auto-Tune operates as a duet between the electronics and the personal. A reconciliation with technology. This development was sparked by a sexagenarian pop star [i.e., Cher] and spread like wildfire across genre, language, and geography. We live in a world saturated by electronics and we're finding ways to make that situation sing.

I would say more, but I can't be hanging around much longer in my striped bathrobe (the blogger's equivalent of a gray flannel suit, and yes, autographed 8X10 glossies are available on request). But if you're following the Auto-Tune debate, you should also check out the smart, quirky Artificating blog. There you can download one of the freakier products discussed in Clayton's article: DJ Champion's "Baako," where a crying baby is fed through the wicked plug-in and sounds like a set of extraterrestrial bagpipes.

Comments:
Walsh is a heart-shaped dingbat.

I hesitate to say more, b/c, like you, I fear that once I start I won't be able to stop.

Can I have an 8x10 glossy of you in your stripy bathrobe? Perhaps we should consider this as an idea for a project, along with photographs of the places where most writers really do their writing! No purpose-converted lofts or handmade desks allowed. I'm afraid my pick-n-mix pj's would frighten the punters off though. And I do now have a nice table so may be disqualified.