Yesterday the Los Angeles Times ran my review of John Updike's Due Considerations. I had quoted Martin Amis's famous characterization of Updike as a "psychotic Santa of volubility," and when it came time to fact-check the phrase, I found myself chuckling over the entire paragraph:

Mr. Updike, of course, is a psychotic Santa of volubility, emerging from one or another of his studies (he is said to have four of them) with his morning sackful of reviews, speeches, reminiscences, think pieces, forewords, prefaces, introductions, stories, playlets and poems. Preparing his cup of Sanka over the singing kettle, he wears his usual expression: that of a man beset by an embarrassment of delicious drolleries. The telephone starts ringing. A science magazine wants something pithy on the philosophy of subatomic thermodynamics; a fashion magazine wants 10,000 words on his favorite color. No problem--but can they hang on? Mr. Updike has to go upstairs again and blurt out a novel.

In the last sentence Amis takes a nasty turn, for which he atones later on, placing Updike in the very top rank of contemporary American prose with Saul Bellow (gold medal) and Vladimir Nabokov (silver medal). In any case, here's how I began my review:

If John Updike had written nothing but novels, his career would still have an almost Victorian amplitude. Since 1959, he has published 22 stout, supple fictions crammed with the minutiae of American life and perfumed, much of the time, with sexual effluvia. The Rabbit series alone would make him a major novelist. Yet the bright book of life, as D.H. Lawrence called it, has never been sufficient to devour all of Updike's prodigious energies. Short stories, light verse, children's books, art appreciation, an anthology of musings on golf--all have poured forth from the atelier in Ipswich, Mass., in the sort of industrial quantities that once prompted Martin Amis to call Updike a "psychotic Santa of volubility."

Then there are the essays. Updike assembled his first collection, "Assorted Prose," in 1965. This was a fairly modest volume, as was its successor, "Picked-Up Pieces," which appeared 10 years later. Since then, the pace has grown more rapid and the books much heftier. "More Matter" (1999) ran to 928 pages, and at that point even the author wondered whether he was coming to the end of his essayistic tether, referring to it as "my fifth such collection and--dare we hope?--my last."

You can read the rest here. Meanwhile, the very same paper just ran my piece on Jonathan Gould's Can't Buy Me Love and Dave Marsh's The Beatles' Second Album. Is there anything more to say about the exhaustively documented Fabs? Evidently (one, two, three, four!): 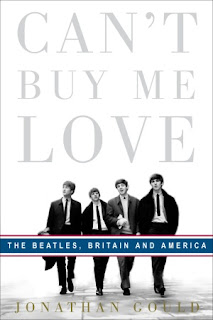 From the very beginning of their career, the Beatles have proved an irresistible temptation for biographers. The first substantial book about them, Michael Braun's Love Me Do, appeared in 1964--just a year after the group's initial conquest of the United Kingdom with "Please Please Me." Since then there has been an onslaught of biographical material, with distinguished contributions from Hunter Davies (best access to the inner circle), Philip Norman (wittiest style), and Bob Spitz (biggest tonnage). Add to that the sanitized self-portrait of The Beatles Anthology (2000), and you begin to wonder whether there are any Fab-related stones left unturned.

On the basis of Jonathan Gould's Can't Buy Me Love: The Beatles, Britain, and America, the answer would have to be yes. The author, a journalist and former musician, hasn't dredged up much in the way of smoking guns or scurrilous revisionism. Indeed, he has relied almost exclusively on secondary sources, with a bibliography running to 12 pages of tiny, eyeball-punishing print. But his accomplishment here is twofold.