A little more than two weeks ago, I was walking home late at night, on what turned to be the last balmy Sunday of the year. As I strolled up Second Avenue, I noticed a large flatbed truck parked by the curb. Lashed on the back was an enormous, rusty slab of steel, whose curved contours suggested a blade for the mother of all snowplows--something on a Paul Bunyan scale. To my surprise, I came across perhaps a dozen of these truck as I walked north, each with its garishly oxidized cargo in tow. In each case the steel sheet was held aloft by thick metal cables, which looked bizarrely delicate in this context, like the product of some industrial spinneret. 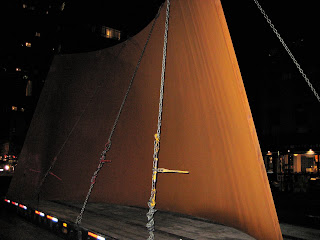 Curiosity finally got the better of me. After snapping a couple of pictures, none of which conveyed the scale of the sheets, I asked a bystander what was going on. He was, fortuitously, the truck driver, and the cargo turned out to be Richard Serra's "Sequence," a mammoth metal curlicue that had made its debut at the sculptor's recent MOMA retrospective. Now, Serra's work has not always warmed the hearts of his fellow human beings. These are aggressive creations, which don't so much buttonhole the viewer as place him or her in a half-nelson. In her Newsday review of the show, Ariella Budick cut to the chase with her very first sentence: "It's easy to hate Richard Serra." Still, she did note a new spirit of playfulness in these 200-ton behemoths, referring to "Sequence" as "an Escher print come to life." Well, the Los Angeles County Museum of Art has offered to house two of the new pieces that Serra created for MOMA, and that was why "Sequence" was preparing for its cross-country odyssesy. 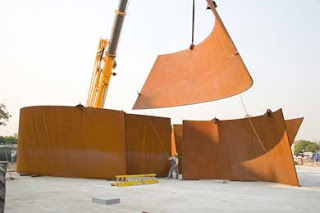 "We can't move oversize loads through Manhattan on a Sunday night," the driver told me. At the stroke of midnight, the dozen diesel trucks would rev their engines and head West. "How long will it take for you to reach Los Angeles?" I asked him. "A week," he said. "We'll be there next Sunday." He missed his target by a single day (maybe he had to change some horrendous flat on the Jersey Turnpike), pulling into Los Angeles eight days later. This photo, from the LACMA website, gives a much better idea of Serra's Brobdingnagian toy. The orange hue of the rusty Cor-Ten steel looks almost cheerful, like something you might use to paint your child's nursery. Or not.