My father has been sick. He spent some time in the hospital, just down the hall from an honest-to-god gangster, whose door was guarded day and night by a stoic-looking police officer. This imparted some extra drama, I guess, but drama wasn't what we needed--not when my father arrived at the hospital in shock, with a potassium deficiency that made the entire world look slightly yellow to him. Now he's on the mend, at home again, and I've been spending more time than usual with my parents, in the house where I grew up. The place was built in 1925. The exterior was covered in white aluminum siding when I was an adolescent, so it looks reasonably trim, but the interior has continued to age, and the beating heart of the physical plant--the furnace--is antediluvian: it used to be a coal-burning unit, and the two doors in front are cemented shut with some brutal adhesive, which looks like bone marrow.

The other day I spent some time up in the attic. Much of the space is occupied by my father's shirts, bundle after bundle of them, wrapped up in brown paper from the Chinese laundry and labeled according to some intricate seasonal taxonomy. There are many, many discarded boxes from space heaters, radios, humidifiers: it looks like the Rapture took place in an appliance store. There are also mementos, stored in every conceivable type of container. Nina and I pried open two old suitcases, with stickers from the U.S.S. United States and luggage tags from Idlewild Airport, which is what they called JFK until 1963. Inside were relics from my childhood. We went through them with my mother, who agreed to throw away some of these treasures but kept quite a few of them for a second culling. One of my favorites: the libretto (I'm afraid that's the word I used) for the rock opera I wrote based on David Copperfield. If you were thirteen years old in 1972, and you had played the two-record set of Tommy until the grooves began to wear out, writing a rock opera was a very natural idea. 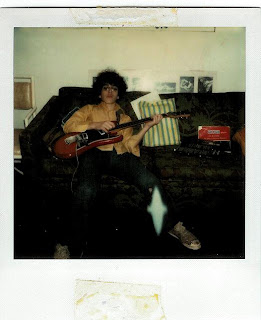 We rehearsed over at my friend Mark's house, in the basement, and he took these Polaroids, which were Scotch-taped into the back of the libretto in order to document the birth pangs of the project. There I am with my red Epiphone guitar and dingy white sneakers, dreaming up some Dickensian lyrics. I had glasses, a surfeit of greasy hair, pimples. Yet at this apex of personal homeliness I was strangely confident. Nothing terrible had ever happened to me. I assumed that I could write a rock opera--knowing even then that some of the songs were merely vehicles for long, idea-starved guitar solos--and that we would perform it in the school auditorium and I would move on to the next chapter in my life as a Renaissance Man. 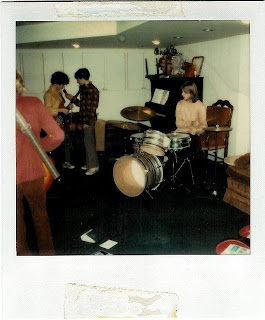 In 1972 a Polaroid camera was still something of a novelty: a small miracle of instant gratification. In fact the original SX-70, with its snappy folding design, was introduced that very year. In some of the photos, the ancient Mylar has begun to pull away from the emulsion. But most of the images are surprisingly crisp, given the crude chemical palette and poor exposure. No doubt their mummified existence in the suitcase gave them an extra shot at longevity. In any case, I've been studying them with embarrassment, curiosity, affection. My youth--represented by a nearly impregnable, steel-belted state of innocence--is gone. The things which I have seen I now can see no more.

When I stay over, I sleep in my sister's old bedroom. The room is small, with a stucco-like ceiling treatment and a side window overlooking our neighbor's stubby evergreens. I stay up late and read whatever I can find on the bookshelves. Luckily there's lots of Nabokov, including a yellowing edition of Pnin, which appears to be from the Idlewild Era. Note the price (35 cents), the sales pitch, the co-eds. If I really attempt to turn the pages, the book will fall to pieces. Instead I peer into it at odd angles and decipher bits like this, wherein poor Pnin is recalled from the very precipice of eternity by an unexpected breeze:

During one melting moment, he had the sensation of holding at last the key he had sought; but, coming from very far, a rustling wind, its soft volume increasing as it ruffled the rhododendrons--now blossomless, blind--confused whatever rational pattern Timofey Pnin's surroundings had once had. He was alive and that was sufficient. 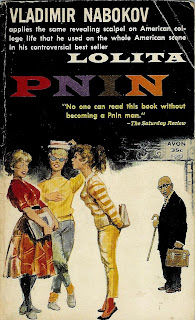 I also find myself thumbing through The Portable Nabokov, mostly for the stories, which have sometimes puzzled me in the past. I read "Cloud, Castle, Lake," whose dreamy and distracted Russian protagonist seems like a distant cousin of Pnin's. This émigré, alas, is living among the Nazis, not in the beneficent bosom of Eisenhower's America. He joins a group of hearty Germans for trip to the country, catches his own glimpse of eternity:

...from the window one could clearly see the lake with its cloud and castle, in a motionless and perfect correlation of happiness. Without reasoning, without considering, only entirely surrendering to an attraction the truth of which consisted in its own strength, a strength which he had never experienced before, Vasili Ivanovich in one radiant second realized that here in this little room with that view, beautiful to the verge of tears, life would at last be what he had always wished it to be.

For his troubles he is beaten and tortured by his German fellows. (A brutal touch: "It occurred to them, among other things, to use a corkscrew on his palms; then on his feet.") This was one of Nabokov's great favorites, and the first of his stories he translated into English upon his arrival in America. For a long time I couldn't understand why. The concluding ugliness seemed to outweigh the ecstasy of Vasili Ivanovich's perfect moment. But I was wrong: the ecstasy is there in almost every sentence, rising and falling with a sort of Doppler effect.

It happened that on a distant slope or in a gap in the trees there would appear and, as it were, stop for an instant, like air retained in the lungs, a spot so enchanting--a lawn, a terrace--such perfect expression of tender well-meaning beauty--that it seemed that if one could stop the train and go thither, forever, to you, my love.... But a thousand beech trunks were already madly leaping by, whirling in a sizzling sun pool, and again the chance for happiness was gone.

Books take us toward life and away from it. They immerse us in experience and make experience bearable by distracting us from it. So I lay on the new bed with its firm mattress until late at night, feeling my antediluvian heart racing and worrying about that terrible thing, the death of a parent. Nothing quite that terrible--nothing quite that permanent--has happened to me yet. A few more years of innocence would be fine.

Comments:
This is wonderful.

Our fathers must be about the same age. Mine's very ill & it's scary.

You write so evocatively about your adolescence that I've situated myself in your description, right next to the tree I used to commune with on the way to school - which was, by the way, Mark Twain's tree. I used to walk through the garden of Mark Twain's house to get to school.

And the pictures of the band are fabulous!

"Once there was a way to get back homeward..." (you know the rest)

This last posting stopped me dead in my tracks and I re-read it several times, taking in your own words with those you quoted with equal relish.

Thanks for all the beautiful writing.

Softtee have designed T-shirts with slogans embracing their relaxed and most chilled out attitudes to everything in general! Your T-shirt is the loudest fashion Statement you can ever make. We all believe; what we wear says a lot about our personality... so convey your messages in the form of logo and ultimately show your attitude!

The post is very nicely written and it contains many useful facts. I am happy to find your distinguished way of writing the post. Now you make it easy for me to understand and implement. Thanks for sharing with us.

the post and the thought and the conception behind it, all are awesome.

I really do like this amazing blog, nice keep it up.

This is my first time I visit here. I found so many interesting stuff in your blog. From the tons of comments on your articles, I guess I am not the only one having all the enjoyment here! keep up the good work.

Excellent post… was just what I was looking for! Thanks again.