A couple of weeks ago, I got a phone message from my doctor: I'm allergic to grass. Since I live in Manhattan, this won't change my life in any substantial way (luckily it wasn’t concrete or carbon monoxide or untrammeled ambition.) Still, I feel like there's a hidden joke here. Grass is the great metaphorical growth: it stands for human beings. Each blade rears its ugly or pretty green head and is cut down. Nobody ever said it better than Whitman, in the closing lines of Leaves of Grass:

I bequeathe myself to the dirt, to grow from the grass I love;
If you want me again, look for me under your boot-soles.

You will hardly know who I am, or what I mean;
But I shall be good health to you nevertheless,
And filter and fibre your blood.

Failing to fetch me at first, keep encouraged;
Missing me one place, search another;
I stop somewhere, waiting for you.

Whitman can be insanely silly. Half of his stuff never really gets off the ground--as if he were the Robert Goddard of American poetry, launching his crash-prone little rockets from a New England cabbage patch. Still, when I was checking the quote above, I was reminded of how stunningly beautiful his work can be. Here he is again. The subject is still grass:

Or I guess it is a uniform hieroglyphic;
And it means, Sprouting alike in broad zones and narrow zones,
Growing among black folks as among white;
Kanuck, Tuckahoe, Congressman, Cuff, I give them the same, I receive them the same.

And now it seems to me the beautiful uncut hair of graves.

Tenderly will I use you, curling grass;
It may be you transpire from the breasts of young men;
It may be if I had known them I would have loved them;
It may be you are from old people, and from women, and from offspring taken soon out of their mothers' laps;
And here you are the mothers’ laps.

This grass is very dark to be from the white heads of old mothers;
Darker than the colorless beards of old men;
Dark to come from under the faint red roofs of mouths. 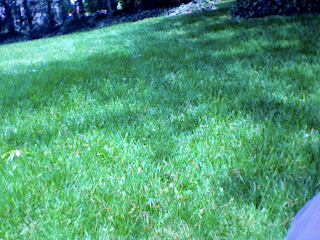 Tuckahoe! I zoomed past that very railroad station on Monday afternoon. I studied the sans-serif signage on the platform for the millionth time: the object of many sophisticated puns when I was a teenager. And now I'm back at the house where I grew up, keeping my ailing father company while my mother takes a vacation. In direct violation of my doctor's orders, I'm sitting out in the yard, surrounded by an L-shaped plot of green, ungroomed, pernicious grass. The phone is ringing inside--an old-fashioned bell rather than some irritating MIDI boogaloo--but I'm not going to answer it. A hedge cutter is going full tilt next door. Small airborne objects keep landing on my hair: seed pods, which resemble helicopter rotors. When you hold them up to the light, you see a tiny network of veins and capillaries, filled with what appears to be blood. It can't be, of course. Still, it brings me back to Whitman's line about the grass, which is too dark "to come from under the faint red roofs of mouths." Can I really be allergic? The breeze has launched another flotilla of seed pods, which do their corkscrew thing before hitting the ground. The birds are singing in stereo. I hate to go inside.

Change of subject: not long ago, Marshal Zeringue (of Campaign For The American Reader) asked me what I was reading, and was kind enough to post this coveted information here. While poking around his site, however, I discovered a feature called The Page 99 Test, which gets it impetus from one of Ford Madox Ford's madly proliferating dicta: "Open the book to page ninety-nine and read, and the quality of the whole will be revealed to you." It turns out that Zeringue had just run this diagnostic procedure on Lore Segal’s Shakespeare's Kitchen--a recent favorite of mine. And what's more, he got the author to chime in:

What does page 99 reveal about its writer? That I think human beings, including myself, are comical. That I'm rather fond of us. That story is a metaphor for what we mean and dream; that my own first loyalty is to the word, which is honor-bound to be neither larger nor lighter, nor noisier nor cleverer, etc., than the idea to which it refers; that my sentences would like to be shapely.

Forgive me for mentioning this, but I couldn't resist.

Finally, I've been following the reviewers-versus-bloggers smackdown with increasing boredom and annoyance. At first there was a different issue at hand: the embattled state of the traditional book section, which is falling under the scythe as newspapers cut costs. Somehow that devolved into a playground pushing match. So let me state the obvious: bloggers and reviewers are complementary breeds. They will often overlap. Bloggers have the edge when it comes to hair-trigger immediacy. Reviewers have the luxury, even on a cheese-paring scale, of being paid for their work, which makes it easier to write 1,000 or 2,000 or 10,000 words on a particular book. Samuel Johnson was wrong, of course, when he made his pitch on behalf of professionalism: "No man but a blockhead ever wrote, except for money." But speaking for myself, I keep things short on my blog because I can’t afford to make them longer. In that sense, money does matter--a lot. Laura Miller touched on this point in Josh Getlin’s Los Angeles Times piece:

"In a weird way, we're part of the establishment now," Miller said, describing Salon's growth since its creation in 1995. "And it sounds harsh, but you get what you pay for. We hired good writers. I used to write for peanuts, and you can't make a living doing that. So it may be that the friction between bloggers and reviewers is just another version of this age-old resentment that aspiring journalists have always felt toward more established journalists."

That friction, or some version of it, will always be around. The old guard--those dying generations, as Yeats might have put it, excluding his own vigorous, monkey-gland-injected self from the Darwinian churn--will always resist the young Turks. As a middle-aged Turk myself, I can get caught up in the struggle from both ends. But I like to keep in mind this paragraph from Cyril Connolly, one of the best and most self-flagellating book critics ever to walk the earth:

Reviewing is a whole-time job with a half-time salary, a job in which our best work is always submerged in the criticism of someone else's, where all triumphs are ephemeral and only the drudgery is permanent, and where no future is secure except the certainty of turning into a hack. There are days when a reviewer approximates more and more to that robot figure on Brighton pier, who wheedles the passers-by in a brassy subhuman voice, and when they put down a coin hands out a cardboard square of commonplace and irrelevant criticism. He can say of his books like the sundial of the hours, "vulnerant omnes; ultima necat." Who would not rather than the best of reviewers be the worst of novelists and contrive between November and April a novel from the excesses which he has committed from May to October?

Let me note, in my brassy subhuman voice, that this lament appears (where else?) in a collection of Connolly’s criticism. Every hour wounds, the last kills--but at least The Condemned Playground is still available in paperback. (By the way, if you seek it out on Amazon, you'll find the following listed as a Statistically Improbable Phrase: "elegiac couplet." What is this world coming to?)

Comments:
Oh my God, you are on a roll at the moment, aren't you.

This long and seemingly disparate post hangs together very well off one sentiment: all flesh is grass. Even if you're even cuter than Paul Auster, which seems frankly like such an extravagance that it can only be true. And you're allergic! It is tragic, and also wonderful.

The Connolly is also wonderful. I've been trying to get hold of a copy of Enemies of Promise, and even manky old paperbacks seem to go for at least £10 these days. He may have been grass but I think it might be growing.