I spent another productive hour in the attic on Sunday. My son, up late on Saturday night playing violent video games with his friend, had fallen asleep on the sofa downstairs. My father, nattily dressed for our visit, was half-dozing on the other sofa: still somewhat vertical and determined to stay awake as a matter of pride. So I popped up to the top floor with my mother to rummage around in the memory palace and fill up one of those industrial-size trash bags.

To a child this was the most exotic room in the house: the tilting eaves, the porthole-like windows, the exposed beams. At some point during the oil shock of the early Seventies, my father paid to have sheets of insulation stapled to the walls. Fabricated from shredded fiberglass, the sheets themselves would now make an excellent addition to some museum of OSHA violations. Back then I admired how seamlessly they covered the ceiling, and felt protected by them. In some obscure way I also felt protected by the long yellow fly strip hanging from one beam. (As my father liked to say: "We killed one fly and all of his cousins came to the funeral.")

The fly strip is gone. Even the flies seem to be gone, replaced by a benign infestation of ladybugs, most of them dead. We swept them out of the way as we piled up the linens, empty boxes, unused photo albums, flannel shoe bags from Allen Edmonds. There is an art to throwing things away. It requires tact, especially in the company of another person. You can laugh at the dotty decision to save this or that bit of trash--but not too much. It's personal. I was heartless when it came to my own things, tossing almost all of them onto the pile. "You're unsentimental," my mother kept telling me. This was a falsehood, as she surely knew. These days it takes very little to move me, as if my own layer of insulation had been stripped away and the air, invisibly flecked with pollen and shards of fiberglass, were blowing directly onto my nervous system. I weep at things, then at the memory of things, then at the memory of remembering them. It's not really weeping: it's an internal pressure, a kind of warmth that creeps upward from the chest and vanishes through the top of one's head. It should be funny but it isn't. 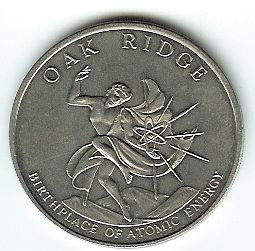 In an old jewelry box, covered with fake or possibly real alligator skin, and with a square clock embedded in the lid, I found this medallion. It's mine. I got it in 1967, when we took one of our rare family vacations, driving from Queens to Oak Ridge, Tennessee, where my father was attending a scientific powwow. With my sister and brother I bounced around in the back seat of our Buick Electra 225. We fought over who got to rest his or her elbow on the pull-down elbow rest. At the first motel, in northern Virginia, we were thrilled to discover that the waitress had a faint accent and that grits were on the menu.

We spent one afternoon in Gatlinburg, with its wax museums and carny atmosphere. In the souvenir shops my brother and I found baskets of rusting American bayonets, supposedly still discolored with Japanese blood. These my parents refused to buy for us. They did shell out for two slingshots--rustic implements with enormous mischief-making potential. Remarkably, we had broken nothing, killed nothing, by the time the Electra pulled into the motel parking lot. We were, my father told us, in the Smoky Mountains. Our room had a narrow deck in back, overlooking the Little Pigeon River. The room and the deck were separated by a sliding glass door, and within a few minutes of our arrival, I walked into it.

No big deal. The door was undamaged. So was I. Yet my collision with that fantastically transparent pane of glass is memorable for one reason: literature drove me to it. My mother had bought each of the children a paperback for the trip, and my prize was Johnny Tremain, which enthralled me. Never before had I taken a book so personally. The molten silver burning the young apprentice's hand prompted some slight, sympathetic agony of my own--not pain, but intense curiosity. And the later scene, where horrible, bratty Isannah is repulsed by Johnny's deformation, was almost intolerable:

Johnny stopped. It was the worst thing that anyone had said to him. He stood like stone, his hand thrust back into his pocket. Cilla froze too--half under the kitchen table, a lime in her hand.

The nervous child went on screaming. "Go away, Johnny, go away! I hate your hand." Cilla slapped her and she burst into tears.

So he went away.

I had discovered several things: fate, cruelty, fellow feeling. These discoveries were so distracting that I didn't see the glass door, which the proprietors had thoughtfully marked with decals of butterflies and fanciful, Flower-Power-era blossoms. All these years later, hundreds of subsequent books have silted up my brain. Yet Johnny Tremain retains its peculiar power and vividness, which is why I kept urging it on my son when he turned eight, which is why he refused to read it. 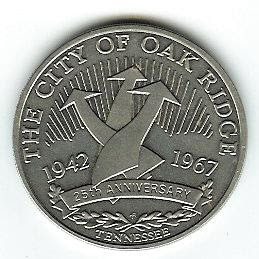 Oak Ridge itself had been summoned out of nothing only 25 years before. It was the so-called Invisible City, built on 60,000 deserted acres as part of the Manhattan Project. The uranium enrichment facilities on the grounds were top secret--as was the very existence of the city, despite the fact that the population soon reached 75,000 and that the installation briefly consumed one-seventh of all the electricity generated in the United States. By the time of our visit, during the Summer of Love, the place had long since come out of the closet. In those palmier, pre-Chernobyl days, nuclear power hadn't yet acquired its bad rep: you could still strike a commemorative medallion with a Promethean man pulling a shiny atom out of his cloak. While my father attended symposia during the day, my mother escorted us through the American Museum of Science and Energy. There we took turns putting our hands in a pair of those hazmat gloves, which allowed you to manipulate nuclear materials through a thick plate of protective glass. In the afternoon we swam in the motel pool--what Jethro Bodine would have called the "cement pond," even though nobody in Tennessee seemed to speak that way. I came away from that trip with three souvenirs: a trio of irradiated glass marbles (immediately lost), the slingshot (ditto), and the medallion.

I brought it downstairs to show my father. He examined it in the lamplight, holding it by the edges. "You've really got something here," he told me. "If you wash it off in soap and water, it'll be a collector's item."

Comments:
What a lovely piece of writing, James.

Many thanks, Charles. I may continue this series of disptaches from the attic--as always, it depends on what we find up there. But I'm glad you liked it.

Dispatches from the attic - a great title.

Love this! Oh, that vanished time. I can't really remember 1967 but I really remember the atmosphere you invoke. And I LOVE Johnny Tremain. It is one of my top all-time favourite books ever. I didn't really warm to it when I was a kid - put off I think by a musty air of school librarians that clung to it - but I read it again at about 16 or so and was profoundly affected by it. I particularly remember the part where Paul Revere - is it him? - shows Johnny how to scale the angel on the silver handle. The way Esther Forbes writes about making things is very deep, actually. I might even reread it now.

Anyway James, I'm glad you're using this time, this experience you're having - cleaning out the attic, having this time at your parents' house. I'll have it vicariously through you, as I'm so far away, geographically, from the process of my parents aging.