In a recent interview, William Gass made clear his distaste for scene-setting details--the state of the author's manicure, the color of his tie--so I won't dwell on the clothes he wore on Wednesday night at the Housing Works Café, where he was celebrating the new audio version of The Tunnel. I will say that Gass, white-haired and bespectacled, looked to be a plump but prosperous 81. He sat patiently onstage during the introduction by Lorin Cuoco, who helped him to found the International Writers Center in St. Louis. And then, before he could utter a word, we got a taste of the audio-verite Tunnel, recorded by the author himself in patient, Midwestern cadences. It begins: "What I have to tell you is as long as life…"

Give the nature of the book itself, you couldn't find a more appropriate opening salvo. Gass originally published The Tunnel in 1995, after decades of intense labor, and it was greeted with both high praise (Michael Silverblatt called it "the most beautiful, most complex, most disturbing novel to be published in my lifetime") and hyperbolic disdain. Nobody was neutral. Either you adored the author's no-holds-barred approach to literary modernism or found it absolutely intolerable. There was, however, a single fact upon which all readers could agree: this was one long novel, nearly 700 pages of high-density prose. Contemplating an audio edition, a less courageous company might well suggest some judicious trimming. But the fine folks Dalkey Archive haven't abridged a single page. Gass recorded the entire novel in a St. Louis jingle studio last spring and summer. And thanks to the miracle of MP3 compression, Dalkey has squeezed this 45-hour marathon onto a mere three discs, neatly packaged with Gass's own artwork and his twelve Philippics (the closest he ever came to supplying Cliff's Notes for his daunting masterwork.) 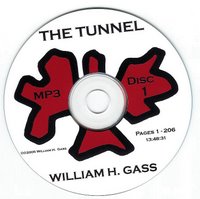 While the sentences motored along, Gass sat motionlessly on the stage, blinking, staring into the middle distance. He seemed almost relieved when the live-action part of the show resumed. Cuoco began the interview proper with a discussion of the recording sessions. Gass had felt most comfortable with one-hour installments, which he then defined as his characteristic breath—let's say, his unit of composition: "I'm talking about how long a particular piece of prose would tend to go on before finding some emotional conclusion." For Gass this is no arbitrary measure. He really does peg it to the physical process of respiration. "Poetry, of course, is created out of our unused breath," he argues. "It rides, so to speak, on carbon dioxide. You're using up what you've taken in, or thought about, and then exhaling."

Was it difficult for Gass to read aloud certain sections of his novel? Again, his answer stressed the sheer physicality of composition, so at odds with its wispy and insubstantial outcome. "My writing is very chewy," he notes. "I had already mouthed the words on every page, many times. I mumbled the words as I did them. (The curses I usually left out.) Still, reading the book aloud did have a tiring effect on me. Valery said: 'Every bad sentence you write trails behind you like a monster.' That constant reminder made the recording a tough process. By now I'm thoroughly sick and tired of the novel!"

Now Cuoco turned to the original composition of The Tunnel. How did Gass know when he was actually done with his loose-and-baggy opus? He was finished, he explained, "when I reached the final sentence, which I had written 15 years before. During my final year of work on the book, I wrote an entire half of it, and I knew that sentence was waiting for me." Put that way, it all sounds easy: a cakewalk. But Gass spent decades on the novel--there are conflicting reports, but according to Dalkey he clocked a good thirty years--and his account of the structural complications made it clear that there were multiple migraines along the way. "Like slow-moving molasses," he recalled, "the book was always creeping away in all directions." To keep this chaotic seepage in check, he erected a number of formal structures, including some dodecaphonic lathe-and-plaster work: "The Tunnel was built on Schoenberg's 12-tone system--I divided it into 12 chapters, with 12 basic themes." (Like the Eroica-shaped structure of Anthony Burgess's Napoleon Symphony, this musical monkey business will probably be invisible--or inaudible--to most readers.)

Nor did Gass wrap the project up with a smile on his face. Did he feel, having finally tunneled his way through to that last sentence, that he "owned the language?" The very idea elicited a chuckle, and Gass cited Stanley Elkin's remark on the same theme: "I felt as though the language owned me. No, I felt very little as I finished the book, except--well, that’s over.” As was the conversation. But Cuoco and Gass had one more treat for the audience: a selection of outtakes from the recording sessions. We sat there in amusement while Gass stumbled in front of the microphone, most often when he hit a scatological pothole. After several attempts to render the celebrated "fuck-a-duck" passage, he was on the verge of giving up. "No, I don't want to do it again," he told the engineer. Luckily for his legion of fans--many whom had packed the reading, and stood patiently on the autograph line with the new Tunnel paperback or stacked, antediluvian editions of Omensetter's Luck or Fiction and the Figures of Life--the author gave it another shot. When it comes to perseverance, nobody does it better than William Gass.

Comments:
I am deeply grateful for Gass' brave work but I can't help being jarred by the essential silliness of this: "The Tunnel was built on Schoenberg's 12-tone system--I divided it into 12 chapters, with 12 basic themes." Schoenberg's 12-tone system can be no more of a meaningful algorithm for the structuring of a literary work than the 12 months of the year can, or the number of the participants of the Last Supper minus one. Your subsequent reference to Burgess is too apt (more Burgess numbers: remember how the original version of 'A Clockwork Orange' was 21 chapters long; 21 representing the age of majority?)...and Burgess, of course, picked up the tic from Joyce. Joyce's excuse for such numerological literary voodoo was probably a case of OCD-flavored genius meeting Jesuitical cryptomania.

But how can modern Gass pretend that a numerical motif in any way evokes a corresponding musical effect (12-tone, pentatonic or otherwise) in prose? It's really not a question of the effect being 'inaudible...to most readers'...there's nothing there to be heard, not even synesthetically, in the 12x12 motif, even for the most sensitive score-reader on Earth.

I only make a big deal about it because I think this is a (subconscious?)left-over from the extra-literary effects once used to sell literary art to the masses (nowadays we just use sex or personal tragedy)...the writer as Wizard; the reader as Rube.

For starters, I'll confess (assuming that's necessary) that I have not read "The Tunnel."

If it's half as good as your post, I'm in for a rare treat. (Next stop: amazon.com).

Thanks so much for posting this. I'm going to see Gass read in St. Louis later this month, but I was really curious what the NYC reading was like.

A brief note about the mention of Schoenberg's 12-tone system...In WG's 1998 Lannan Foundation interview with Michael Silverblatt (available at www.lannan.org), he's asked about the "music" of his work (re: Cartesian Sonata and others). He says: "Since I don't have a structure, generally, that vaguely even resembles a plot or story...there's usually something there...but what I prefer to work with are themes. And symbols and sort of moods and conditions. So I find frequently that a musical structure is much more amenable to what I want to do. Of course it has to be adapted. You can't *really* do it. And the Schoenberg thing is a far stretch. It's a metaphor. What I wanted to do was -- choosing Schoenberg meant freeing the old notes from previous systems, and then the idea of having 12 chapters about the same length, and in each chapter all 12 of my fundamental motifs that I've chosen would be sounded, but in different arrangements. So that certain aspects or meanings of the text would emerge more at the beginning and then sink down and be relatively innocuous or weak at another point. All this is of course superimposed upon a completely different kind of structure, The Tunnel itself. And so on. But that's what I had in mind."

This Lannan reading's first part -- Gass reading by himself -- ends with the 'fugue' portion of The Tunnel. In introducing that part, Gass says: "Although I have absolutely no musical faculty at all -- barely ears -- I am fascinated by musical form, and generally organize the larger as well as some of the smaller structures of my books musically. This is of course true of 'Cartesian Sonata,' but also 'The Tunnel,' whose 12 chapters -- in my [self-mockingly] 'grandiose' scheme of things, resemble, or are meant to resemble, the 12 notes of Schoenberg's system."

The reading and interview are fantastic. Go here: http://www.lannan.org/lf/rc/event/william-gass-with-michael-silverblatt-november-5-1998/.

Thanks for posting this quote and this link...good stuff

By the way, Steve, I would note that Gass seems to be conceding your initial point, when he refers to his "grandiose" organizational scheme. For Schoenberg, the number 12 actually meant something: by forcing composers to put all 12 tones of the tempered scale into play at all times, he was cutting music loose from traditional key relationships (and, according to his crustier detractors, from its audience.) For Gass, the number is completely arbitrary. Hence: silly. Point, set, match. But it did allow him to finish the book.

In any case, far be it from me to deny William Gass (or anybody who has committed her/his life to art-making)his tics, his twists and his metaphysics! Anything short of licking his comb before running it through his hair is permissible if the work gets done...