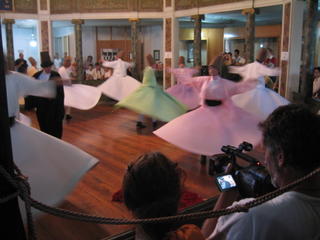 These are whirling dervishes of the Mevlevi Brotherhood, attaining God via rotation. It was an amazing spectacle, not the least because it was so contained--I expected a noisy climax, and got serenity instead. The dervishes spin by, men and women both, mostly with their eyes closed, having already shed the black cloaks that symbolize earthly attachment. Their faces look calm. The dance takes place in an octogonal space, and the outer gallery is packed with camera-toting gawkers from the West, us included, which raises some interesting questions about ecstatic ritual versus performance. Which is it? Both? In any case, the tall hat, called a sikke, is supposed to be the "tombstone of the ego." A sad fact: in my case, it would have to be at least twenty to thirty feet high. 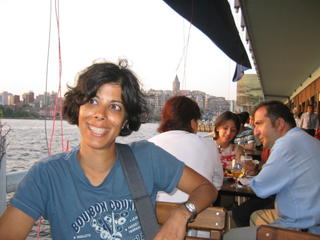 Here's Nina, feeling no pain. She had spent part of the previous week hunkered down in a Turkish Internet cafe, finishing an article on data visualization and wrassling with the counterintuitive (to an American) layout of the computer keyboard. And now? We're all sitting on the Galata Bridge, watching the sun set on the other side of the Golden Horn, bathed in a honey-colored light that my ratty digital camera failed to capture. The conical shape to the right of her head is the distant Galata Tower, right next door to our hotel. Due to a fluke we got the absurdly fancy suite on the top floor, outfitted with every conceivable amenity except for hot water. Hence the bracing, chilly sponge baths and my reluctance to shave. Aside from that it was perfect, and the views of the adjacent tower--built in 1348 by the Genoese, now housing a dreary nightclub with steamtable food--made me forget the hot-water problem for literally minutes at a time.