The original idea was to fly directly from the Istanbul airport to Izmir--formerly Smyrna, Homer's stomping ground--and then pop over to nearby Ilica. There were, alas, no seats available. Instead we spent sixteen hallucinatory hours on a bus. I took half a Unisom the moment we rolled out of the otogar, which never really put me into a deep sleep: I kept having these lurid dreams, with men screaming in Turkish and copious gunfire. Finally I realized that the bus people were showing Die Hard 2 dubbed into Turkish on the overhead screen. At that point I gave up on sleep and settled for an exhausted, head-lolling stupor. Hours later we crossed the rippling Sea of Marmara on a ferry. Not until we had climbed off the bus and mounted the upper deck did I say to Nina, "Are we on a boat?" 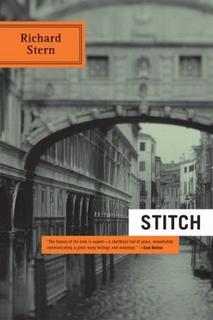 Anyway, one of the things that kept me going during my interludes of consciousness was Richard Stern's STITCH, part of an excellent reissue program from Northwestern University Press. Festooned with the sort of blurbs that most writers would die for--"brilliant," says John Cheever, as opposed to "beautifully damn good" (Howard Nemerov) or "superb" (Saul Bellow) or "[among] my favorite two postwar novels" (John Berryman)--this is early Stern, first published in 1965. The author's evocation of postwar Venice is a major accomplishment. His portrait of the sublimely cantankerous Ezra Pound is even more impressive. Now, it happens that Stern encountered Pound in Venice during this very period, and his brief recollection (reprinted in One Person and Another) is wonderfully vivid:

Pound was flat on the bed, a blanket to his chin. The face was thinner, the beard sparser than my expectations, the face lined like no one else's, not the terrible morbid furrows of Auden, not the haphazard crevices of so many benign elders. For me, at least, these lines had the signatory look of individual engagements. Brow and cheeks, arcs and cross-hatches, with spars of eyebrow and beard curling out from what the sculptors worked with, the grand ovoid, the looping nasal triangle.

That final sentence points straight to the author's strategem in STITCH: he transforms the epic and erratic poet into an epic and erratic sculptor. Like his real-life model, Thaddeus Stitch has descended into an anti-Semitic lather during the Second World War, and earned himself a long stretch in a jail cell. (The dicey issue of Pound's sanity, and his residence at St. Elizabeths, has been left out of the picture.) Now a free man, too feeble to work and too guilty to savor his retirement, he crosses the path of two artistically-inclined young Americans in Venice. Innocence does its fender-bending thing with experience, as it inevitably must. I won't give away the plot, but suffice it to say that the perfection of life and the perfection of art are both in short supply. Run, don't walk, to the bookstore and pick up these reissues. Also, keep an eye peeled for a Brief Encounter with Richard Stern, which should appear on HOM during the next couple of weeks.

Meanwhile (according to the Scotsman), a Parliamentary firestorm is underway regarding the most pressing issue of our time: discounted pricing of the new Harry Potter book. Labour MP Lynne Jones declares: "I note that copies of Harry Potter And The Half Blood Prince are selling in supermarkets for as little as £4.99 compared with the trade price for lower volume outlets of £10.70 and the retail price of £16.99." Not exactly Churchillian, is it? To be fair, Jones is concerned for the viability of small bookstores, an issue close to my own heart. But I'm afraid this horse left the barn a long time ago. Consumers expect deep discounting and will turn away in droves if they don't get it. On a cheerier note, ten other MPs have put forth a declaration defending J.K. Rowling against the Pope's doctrinaire spitballs. Hooray. We must take our good news where we can find it.

I'm sure that's what Roman Polanski is thinking, anyway. The pint-size Pole has just won his defamation suit against Vanity Fair. I haven't been following the case very closely--and God knows that Polanski has committed his share of sexual misdemeanors over the years--but it brought to mind the related material in the Dino de Laurentiis bio I translated in 2002. Some fascinating facts: De Laurentiis originally wanted Polanski to direct his goofy 1976 remake of King Kong. The mind boggles, does it not? Jessica Lange, a giant mechanical monkey, and Roman Polanski at the helm? Anyway, the Italian version of the book also stipulated that De Laurentiis was the last person the director visited before fleeing the country in 1978. According to Dino, in fact, he dipped into the petty-cash drawer to fund Polanski's airplane ticket. True or not, this stuff has been expunged from the American edition.

Finally, I picked up The Double Dream of Spring the other day, thinking I might have a refreshing dip in Ashbery's swift-running stream of consciousness. I wasn't in the mood. I didn't feel like letting my free-associative hair down. However, I did latch onto this final stanza from "It Was Raining in the Capital," more morbid and balladic than is Ashbery's wont:

The sun came out in the capital
Just before it set.
The lovely death's head shone in the sky
As though these two had never met.